This is the 1st of 3 reviews for the Sword and Sandal Blogathon being run by Debra over at Moon in Gemini.  Tnx for letting me take part! 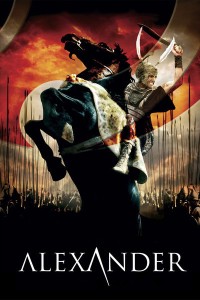 “Conquer your fear, and I promise you, you will conquer death. ” – Alexander

Brief Synopsis – Biopic of the legendary General Alexander as he tried to conquer the world with his Greek army.

My Take on it – I have always been a fan of Oliver Stone’s films and have no explanation how I happened to have missed this one.

I chose to watch the Ultimate version of this film which supposedly features Stone’s full vision of how the story of Alexander should be told.  It’s a daunting 3 and a half hours and despite being a fan of watching the full vision of director no matter the length, this film just felt too long for it’s own good.

Stone’s choices of how to edit and show this film detract from the impact that a film like this should make.

His choice to show the story in a non-linear approach makes things way too confusing and detracts from the epic-ness of it all.

I can’t say that I was happy about the casting of Colin Farrell as the lead because he truly is uninspiring as the great historic leader and comes across as being rather mediocre in the role.

Stone has always been able to attract a talented cast and here he has some great actors in supporting roles; Val Kilmer, Anthony Hopkins, Angelina Jolie, Rosario Dawson, Brian Blessed, Christopher Plummer and Jared Leto are all great here.

The lack of focus is what makes this film falter and it meanders too much along the way.

Despite this being Stone’s dream project, he unfortunately fumbled the ball too much and doesn’t give us as memorable film as he could have.

Bottom Line – Loses much of it’s impact due to tone style of directing.  The non-linear approach makes things too confusing instead of epic as it should feel. Farrell is mediocre as this great historic figure and IMHO was incorrectly cast as the lead of this film.  Excellent supporting cast, but Stone tries to do too much all at once and falters due to lack of focus.

MovieRob’s Favorite Trivia – Val Kilmer gained over 50 pounds and stopped working out for the plump role of Philip.  (From IMDB)