This is the 2nd of 3 reviews for the Sword and Sandal Blogathon being run by Debra over at Moon in Gemini.  Tnx for letting me take part!

“How DARE you and the rest of your barbarians set fire to my library? Play conqueror all you want, Mighty Caesar! Rape, murder, pillage thousands, even millions of human beings! But neither you nor any other barbarian has the right to destroy one human thought! ” – Cleopatra

Brief Synopsis – Historic biopic of the Queen of Egypt who had political and social dealings with both Julius Caesar and Marc Anthony.

My Take on it – For as long as I can recall, I’ve heard about this epic 4 hour film about the life of Cleopatra, but in truth, I really knew nothing about her life and what transpired during the timeframe depicted in the film.

For some reason, I never got around to watching this and didn’t have much interest most probably because I’m not the biggest fan of Elizabeth Taylor.

The writer/director of this film, Joseph L. Mankiewitz actually wanted to make two separate films, but the studio apparently forced him to make one long one instead.

In the end, we get one long four hour movie that merges both storylines into one.

Ironically, the tone of both stories are very different and it’s still possible to view each section of teh film as a separate film.

Star Elizabeth Taylor was romantically linked to Richard Burton (who played Marc Anthony) at the time, but surprisingly, she has much better chemistry with Rex Harrison (who portrayed Julius Caesar).

I can definitely understand why this film could be considered a flop, but it was definitely meticulously created by Mankiewitz and is a movie with definite epic proportions.

As a history lesson, I must say I was able to learn much about how the Egyptian and Roman Empires worked at the time and this film enlightened me to so much more about that time period.

Bottom Line – Glad I finally saw this epic. The first half is so much better and more interesting than the second.  I can understand why this was considered a flop tho. Excellent cast helps raise the level of enjoyment.  Learnt a lot about her life and the lives of the Roman rulers who she had dealings with. Recommended!

MovieRob’s Favorite Trivia – When Milton Berle was asked if he’d seen “Cleopatra” yet, his reply was ” I never miss a Hume Cronyn picture! “. (From IMDB) 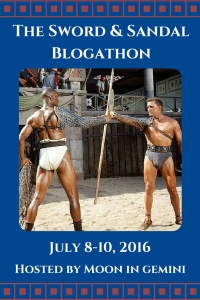