This post is the next entry in this month’s A Timely Blogathon being run by Anna of Film Grimoire and myself.  This review of Slow West (2015) is by Kira of Film & TV 101.

Check out her site which is filled with recipes, podcasts and movie reviews galore! 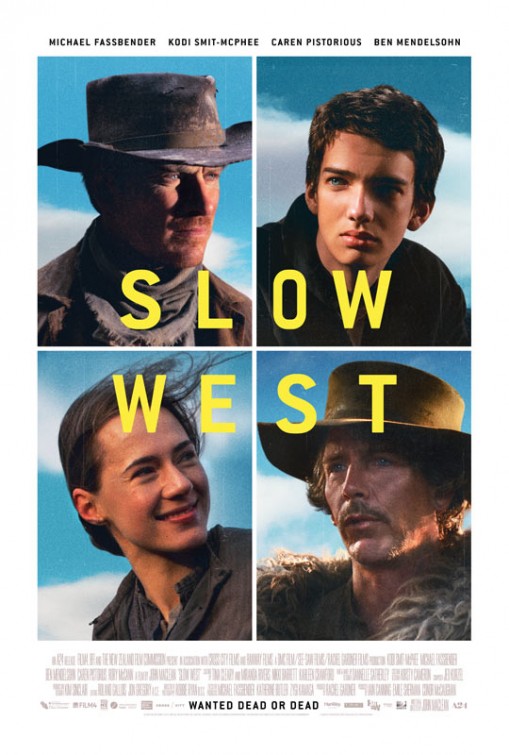 A young Scottish man travels across America in the hope of finding the woman he loves, whilst also attracting the attention of an outlaw along the way.

16 year-old Jay Cavendish (Kodi Smit-McPhee) is intent on journeying across America at the end of the 19th century as he searches for the woman he loves but lost a time ago. Along the way, Jay gains the company of Silas (Michael Fassbender), mysterious traveller with an agenda of his own, and the unlikely pair are soon pursued by an outlaw and former associate of Silas’, Payne (Ben Mendelsohn).

Last year saw the release of Slow West – a film that I believe could prove very important in the apparent rebirth of the western genre. It is also a film that I massively enjoyed for a multitude of reasons, and thought it only fair that I shared those with you.

Firstly, there are the performances. It’s funny because the roles played by both lead actors are quite minimalist; there’s not an awful lot to them but quite a lot is gotten across throughout the course of the film. Smit- McPhee’s role is quite sweet in essence as he not only travels across America, but along the pathway to manhood as well. The relative newcomer’s acting was never to win any awards, but did what it had to do in showing the boy toughening up as he embarked on his manly mission. What I found to be the biggest thing to hinder his performance was the ‘Scottish’ accent he put on, but in the grand scheme of things in a film where very little is actually said, the dodgy accent doesn’t really cause to big of an issue.

Now, it seems to be something I’m starting to say quite often, but Michael Fassbender is yet another actor who is quickly becoming a favourite of mine, yet who perhaps isn’t very widely acknowledged for his capabilities. As Silas, he again proves why more people should know his name. In another minimalist performance, perhaps more so than Smit-McPhee’s, Fassbender’s character mystifies with what he tells us, but does so even more with what he doesn’t say. The art of his characterisation of Silas lies amongst subtleties, which when added altogether, make for an absolutely tremendous character.

The locations for Slow West are stunning. Shot in New Zealand, the film is moved along nicely with breathtaking shots of the landscape, which seem to tell a story all by themselves. The beauty within the cinematography also makes the outcome of the film all the more cruel, which just further accentuates the twisted undertones of dark humour that are laced throughout the entirety of the film.

Overall, if there is a film that should be responsible for the regeneration of the western genre, nobody should be too disappointed if Slow West was to take that title. It has the ingredients of a classic, but blend themes together with aspects of modern cinema and the results are wonderful. It may start off slow-moving, but by the time it reaches the end-sequence massacre, that is, poetic to say the least, you’ll be wondering where the past hour and a half went.