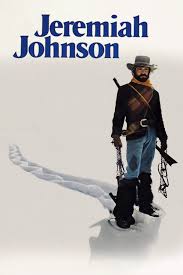 “[reading the note pinned to Hatchet Jack’s shirt] I, Hatchet Jack, being of sound mind and broke legs, do leaveth my rifle to the next thing who finds it, Lord hope he be a white man. It is a good rifle, and kilt the bear that kilt me. Anyway, I am dead. Sincerely, Hatchet Jack.” – Jeremiah

Brief Synopsis – A frontiersman tries to live his life in peace while living close to the lands of the local warring Indians and other Inhabitants of the frontier.

My Take on it – This is a movie that I’ve been interested in seeing for quite a while because I’ve heard that it is considered by many to be one of Robert Redford’s best performances.

It’s a very subtle performance from him but just like in All is Lost (2013), he shows his amazing ability to act amidst minimal dialogue.

The storyline has its ups and down and lags every now and again but overall it’s interesting to see what happens to this lone man.

The cinematography is superb and we get some really beautiful wide shots of landscapes that constantly reminds us of how amazingly beautiful the frontier countryside must have been in the 1800’s.

Redford and Director Sydney Pollock chose some great locations for shooting this film.

Bottom Line – Redford does a great job in a pretty underappreciated role. The story lags a bit here and there but mostly stays on an interesting track. The cinematography is wondrous here and Redford and director Pollack found amazing landscapes to film that still make the world feel like the 1800’s. Recommended.

MovieRob’s Favorite Trivia – Reportedly, actor Robert Redford did many of his own stunts. Redford also apparently paid the stunt guild accordingly so as to not put any stuntman out of work. (From IMDB)