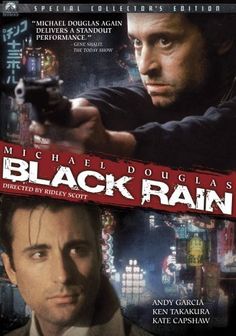 “Sugai-san, I am the solution… to your problems. ” – Nick

Brief Synopsis – Two NYC cops must escort a wanted murderer back to Japan for trial but have no idea what they are really getting into.

My Take on it – This is another movie that I recalled seeing and enjoying on cable back in the early 90’s.

I didn’t recall much about the plot except for one major spoiler along the way.

I liked the way that this is a seemingly simple cop movie but it still approaches the ideas of Eastern culture including honor in a careful manner so that they stand out.

The actors keep us engaged with the storyline even during the lags of time where things are a bit slow.

I think that Douglas’ choice of a haircut here just doesn’t work well at all.

Personally, I found it hard to imagine someone like Gordon Gecko looking like a hippie off the street.

Douglas has done so many better films than this one and it’s too bad that this one just wasn’t workable enough.

Bottom Line – On the surface this feels like a typical procedural but the way it approaches the subject of honor and Japanese culture makes it stand out a bit. Douglas, Garcia, Ken Takakura and Capshaw are all great here and keep us engaged throughout despite the story itself being a bit weak.  Douglas’ haircut was a bit too much since it seems they wanted him to be perceived as an 80’s rebel. Hard to imagine Gordon Gecko as the hippie and free spirit that they want his character to be here.   He has made so many better films over the years.

MovieRob’s Favorite Trivia – Yûsaku Matsuda’s last film role. Matsuda knew he had bladder cancer and that his condition would be aggravated by acting in the movie. He elected to do so anyway, unbeknownst to director Ridley Scott, reportedly saying, “This way, I will live forever.” He died on 9 November 1989, less than seven weeks after the film’s American premiere. The film is dedicated to his memory.(From IMDB)