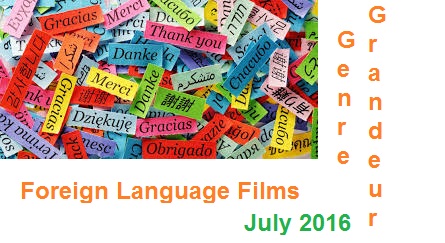 For this month’s next review for Genre Grandeur – Foreign Language Film (2013-Present), here’s a review of The Dark Valley (2014) by Ruth of FlixChatter

Thanks again to Jordan of Epileptic Moondancer for choosing this month’s interesting (if not uncomfortable for me) genre.

Next month’s Genre has been chosen by Jane of 500 Days of Film  She has chosen another genre that is well out of my own comfort zone but I am up for the challenge.  We will be reviewing our favorite Horror Films

Let’s see what Ruth thought of this movie:

I have to admit I probably wouldn’t have stumbled upon this Austrian Western if it weren’t for my affinity for English actor Sam Riley. And for that I’m grateful to him, and he’s an unlikely-but-perfect choice in the role of a German-speaking, Texas cowboy protagonist.

It’s always a good sign when a film starts off in a captivating way that made you want to know more. In the opening scene, we see a terrified couple hiding in a basement of a lodge. We don’t know who they are except they’re on the run, but soon they’re captured and the man is severely beaten as the woman is dragged away screaming.

The film takes place years after that incident in the opening scene. A lone rider on a horse saunters into the secluded town. It’s one of my all time favorite opening credits ever. Exquisitely shot somewhere in Austrian Alps, set to the song Sinnerman by Clara Luzia that complement the setting beautifully. It sets the tone of the film that this is a slow-burn revenge thriller, as the action doesn’t really start until about a half hour into the film. But this is the kind of films that rewards your patience.

The mysterious stranger goes by the name of Greider (Riley). He’s got a cold welcome from the chieftains of the town, that is the six sons of Old Brenner. The Brenner clan has dominated the town for generations and for some reason the townsfolk are compliant to their rule. Despite the rude welcome, the Brenners let Greider stay, and even let him take photos of the family with his daguerreotype camera. Greider is placed in the home of a woman and her daughter Luzi, the narrator of the story.

The film takes its time before Greider exact his revenge, but the moment leading up to it in the woods is brimming with suspense. One freak logging accident happens after another, and of course Greider is immediately suspected. One particular accident is quite gruesome for my feeble nerves, but it’s nothing compared to the brutal scene that happens later in flashback. The film’s plot concerns a medieval practice ‘jus primae noctis’ (the right of the first night) harshly enforced by the Brenner patriarch on the young woman in the town. The third act reveals who and what happens in the opening scene, it should be obvious by then which makes Luzi’s VO explaining it seems overkill.

The strength of Das Finstere Tal is in its eerie quietness… the seemingly serene vista and the taciturn demeanor of its hero. Greider seems a passive man, not willing to fight back when he was beaten by one of the Brenner brothers during a shopping errand with Luzi. The fact that Riley isn’t who you’d picture as a cowboy actually makes him an effective actor for the role and he more than acquits himself well here. There’s a piercing intensity in Greider’s eyes, and a suppressed restlessness. He made you believe he’s filled with rage and absolute contempt for those who’ve wronged him, but he’s not a monster devoid of humanity. There’s a particularly memorable ‘gold coins’ scene between him and a female innkeeper. He’s so consumed with anger but backs away the instant he realizes he’s stooped to the level of the Brenners. I also love that scene in the end between him and Old Brenner, it’s so emotionally-charged with barely any words spoken.

Austrian actor Tobias Moretti as the eldest Brenner son Hans and Paula Beer as Luzi are two of the most memorable supporting cast in the film. Hans is just a vile human being, appropriately brutal and cocky in his treatment of the hapless townsfolk. There’s a moment during a wedding where he orders the bride to dance that just makes me shudder with fear and loathing. The final shootout in the woods was perhaps a bit over the top with its use of slow-motion, but it’s still fascinating to watch. Greider’s bad-assery isn’t just that he’s a great shooter, but the fact that he’s planned his revenge meticulously, down to the Winchester rifle he brought just for the occasion.

It’s a pity this film wasn’t chosen in the Best Foreign Language category in 2015, but it was nominated for nine German Oscars (the Lolas). I also wish Sam Riley had gotten some recognition because he truly displays such masterful acting here. He conveys so much with his eyes, he can be menacing and vulnerable at the same time.

I’m not well-versed in classic westerns, but I read that Austrian filmmaker Andreas Prochaska was largely influenced by Clint Eastwood’s westerns and some even compare it to Eastwood’s Pale Rider as it’s also about a lone hero taking on a village. But the setting and style in which the film is constructed certainly sets this one apart in this genre. The cinematography and music are particularly striking that I’ve made an appreciation post for that.

The Dark Valley is one of the most beautifully-shot films I’ve ever seen. It made me wish I had seen it on the big screen. Cinematographer Thomas W. Kiennast seems to have that David Lean touch in capturing those amazing wide shots. Filmed in the mountainous region of Trentino-Alto Adige, Italy, every shot is good enough to frame. The use of anachronistic music can be very effective when used well, and I think that’s the case here. German composer Matthias Weber did a fine job in creating an ominous, haunting tone to his score that fits the eerie, atmospheric feel of the film.

I can’t recommend this enough. It might be too slow or bleak for some but it’s certainly worth a look if you’re looking for an off-the-beaten path genre film that’s as exquisite as it is haunting.