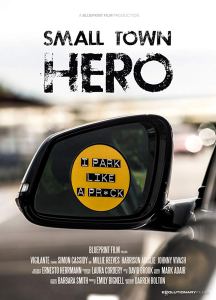 “You get a cat to get rid of the rat, but when the rats are gone, you don’t want the cat anymore. But what happens when you get rid of the cat? All the rats come flooding back.” – Pep

Brief Synopsis – A man takes his vigilantism to a new level when he joins the local neighborhood watch.

My Take on it – This new film by Darren Bolton takes an idea and shows us how it would look from an extreme perspective yet it still appeals to so many people.

The idea of taking the law into ones own hands is something that just about everyone in the world dreams about doing (even if only on a small scale) and this film takes that issue and shoves it in our face.

We all get annoyed by things that happen around us, but are too PC or even scared to take action.

How many times have you seen someone litter and wanted to scream at them to pick it up?

How many times have you watch someone commit some other form of “minor” crime and felt the urge to stop them?

The real question tho is how many times have you acted on those feeling?

The answer for almost all of us to those three questions are a lot, more even and now way!

The main character of Pep is the opposite of most people because he acts on those feelings and is willing to go further than any of us in order to achieve his goal of cutting crime in his village.

I liked the way that this was told from the perspective of a documentary. It adds a lot of realism to the film on the one hand, despite the fact, that on the other hand, we know that people talk and act differently when they are being filmed as opposed to when they are in a one on one conversation.

This makes us sometimes question what is being said by most of the characters.

Pep tho, doesn’t care what anyone says or things and feel genuine in all he says and done which is why we trust him the most despite his tendency for violence.

Let’s hope Bolton keeps making bold films with characters like this in the future.

Bottom Line – Very interesting premise that works most of the time and keeps our interest throughout. Really liked the documentary style which makes it feel more real and gives the story a feeling of being something that everyone knows or should know about. Liked the no-nonsense manner of Pep and it’s easy for anyone to relate to his stance on things even if they wont really admit it.  Pep does what we all wish we could have the guts and gall to actually do which is why he appeals to us. Recommended!