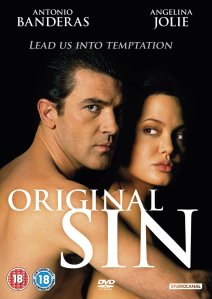 “No this is not a love story, but it is a story about love. About those who give in into it, and the price they pay. And those who run away from it, because they are afraid, or because they do not believe they’re worthy of it. She ran away. He gave in.” – Julia

Brief Synopsis – A wealthy man awaits the arrival of his bride to be but is she really who she claims to be?

My Take on it – This is a movie that was recommended to me months ago by fellow blogger and friend Damien of Riley on Film.

I promised him that I’d eventually get to it and as the saying goes, – better late than never 🙂

I found this to be a nice thriller with some pretty good twists but it took waaay too long to get to it’s point.

The journey to that point is a pretty bumpy one and many times there are boring lulls in the story before they choose to reveal to us what is going on and that takes away from the impact of the story.

The trio of leads – Antonio Banderas, Thomas Jane and Angelina Jolie are all pretty good here, but none of them are able to break out and make us care about their character or of the story itself which is a shame.

The story tries to focus on love and deception but loses it’s way because it tries too hard to  try to shock with the graphic love scenes instead of developing the story properly.

The premise itself feels like it is recycled from so many other films or books and that lack of original feeling also hurts the story.

Bottom Line – Nice thriller but it takes too long to get to its point and the journey there has too many ups and downs. Banderas, Jane and Jolie are all competent here but none really steal the show.  Premise doesn’t feel as original as it probably should.

MovieRob’s Favorite Trivia – Michelle Pfeiffer’s production company had originally purchased the rights to the novel with the intention that Pfeiffer herself would star. However the actress opted to simply serve as producer on the film. (From IMDB)