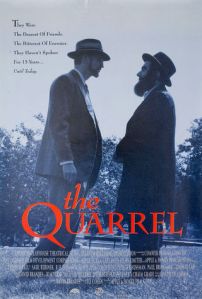 “Why did I feel compelled to follow this man, certainly not to join in prayers that I stopped believing in years ago and not to perform a mitzvah for a man who is beyond our help anyway.” – Chaim

Brief Synopsis – Two long lost friends meet by chance and debate their views of faith and belief in God after having both experienced the horrors of The Holocaust just a few years earlier.

My Take on it – This is a film that as soon as I saw the premise, I was immediately intrigued to see what it had to offer.

As a Jew, the premise here is obviously very close to my heart and the I had high hopes for really enjoying this film.

In truth, I wanted to like it a bit more than I did, but something felt missing the whole way through.

This film brings up many interesting theological and philosophical questions and they do a nice job debating both sides of the controversial issues.

Having a story with two main characters who went through similar ordeals and came to differing conclusions regarding faith and religion and having them discuss and debate their thoughts on the subjects is a great one.

It was easy to feel like a proper eavesdropper on these conversations and each sides brings up some quite substantial arguments for their side of the debate.

The fact that this story is based on a true event helps make it even more powerful.

I’m now quite intrigued to try and seek out the book that this film is based on in order to read how things play out there.

This film still keeps me thinking about the issues so many days after watching it and I believe that’s because they bring the debate arguments to up to a high and believeable level.

Bottom Line – Wanted to like this film even more than I did because it really brings up some great discussions of the philosophical and theological views that differ between those who believe and those who have lost their belief. I felt quite comfortable eavesdropping on this debate because each brings up so many worthy questions and answers throughout their conversation.  It’s amazing how this is based on truth and I am quite tempted to try and find the book this is based on because it brings so much to think about even days after watching this film. Recommended!

MovieRob’s Favorite Trivia – Chaim Grade’s short story, “My Quarrel with Hersh Rasseyner,” describes the chance meeting of a Holocaust survivor with an old friend from the mussar Yeshiva. The narrator has lost his faith, while the friend has continued to lead a pious and devoted religious life. The former friends debate the place of religion in the postmodern world. The story has been made into a film, The Quarrel and a play.(From Wikipedia)