This month’s Genre has been chosen by Jane of 500 Days of Film  She has chosen another genre that is well out of my own comfort zone but I am once again up for the challenge.  We will be reviewing our favorite Horror Films 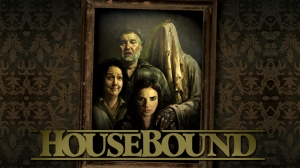 “But anyone who says there’s no such thing as a bad egg obviously hasn’t worked in social services. ” – Dennis

Brief Synopsis – A girl caught robbing a cash machine is sentence to a year stuck in her parents house which she quickly realizes may be haunted.

My Take on it – This film is one that I have had absolutely no desire to ever see, but I decided that in order to make my guest choices of the Genre for the Genre Grandeur series more personal (and expand my own personal horizons of these genres), I will take a recommendation from my guest for a film to watch for this Genre Guesstimation series.

This film was Jane’s choice for me to watch.

All I can say after watching this is that I really don’t understand horror films.

This wasn’t my cup of tea at all.

Instead of understanding the horror aspects of this film, I found most of it completely laughable; not in a good way, but rather in a silly way.

I didn’t like any of the characters and couldn’t care less what would happen to any of them.

I have heard from lots of people how great this film is as a horror/comedy and I just felt lost and it once again makes me more aware of how much I don’t understand the genre of horror.

There were a few deadpan comments that I found slightly humorous, but overall, I can’t see why this is even considered a horror/comedy.

All I can say Jane is that I tried. 😦

Bottom Line – Not my cup of tea at all. I found too much of it just laughable and couldn’t understand why people liked this film as a horror film.  Weird that this is considered a horror/comedy because I couldn’t find much funny with it either.  Guess one needs to be a fan of the genre to get both the horror and comedy aspects of this film.  Couldn’t care about any of the characters and was bored through most of this film.

Genre Grandeur Worthy? – Not at all. As I’ve said numerous times horror just isn’t my genre and I cant imagine ever wanting to watch this again.