Thanks to Prime Six for this recommendation. 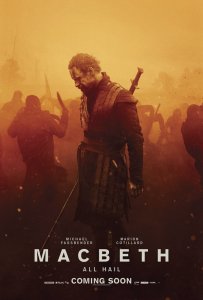 “So foul and fair a day I have not seen.” – MacBeth

Brief Synopsis – After being told that a prophecy claims he will one day be king, a man does all he can to make this prophecy come true.

My Take on it – I am not ashamed to admit that I’ve never been much of a fan of Shakespeare and only Kenneth Branagh’s interpretations have helped me enjoy the Bard’s work.

To me, this film was a disaster because not only is the language hard to understand and follow, but the story itself is told in a way that too much is alluded to, refereed to or just mentioned instead of it being a straight story.

Yes, parts feel like a Game of Thrones episode, but even GoT knows how to keep its audience entertained despite some tedious scenes and dialogue; here it was all a mess.

Again, it’s quite possible that the problem here is me; perhaps my lack of understanding and love for the Bard’s written work has made a film like this just too incomprehensible to me.

Truth is, I can’t say whether I care about that or not because this movie just wasn’t enjoyable to me at all for whatever reason.

Perhaps those of you that enjoy Shakespeare’s works will enjoy this more, but I can’t on any level recommend this film.

I think I need a break from these kind of movies….

Bottom Line – Was completely bored through this because there is too much that is allegorical and symbolic and not a straight story. The Shakespearean language didn’t help me enjoy it any more.  Fans of Shakespeare’s works and language will probably get a lot more out of this than I did.  I think I’ll keep away from Shakespeare for a while.

MovieRob’s Favorite Trivia – Visibility was so poor at the Isle of Skye during filming in early February 2014, that Marion Cotillard had strayed into a bog and disappeared from view. It had taken two crew members to fish her out while the mud sucked at her feet. (From IMDB)