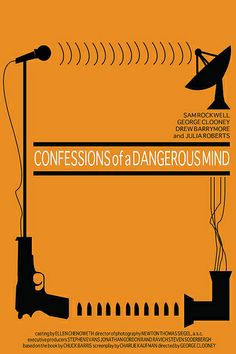 Thanks to Ben of Views From the Sofa for this recommendation. 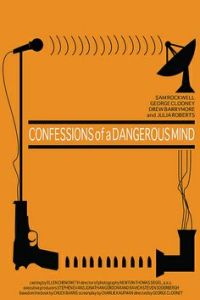 “You’re 32 years old, and you’ve achieved nothing. Jesus Christ was dead and alive again by 33. You better get crackin’. ” – Jim

My Take on it – This is a movie that I saw not long after it came out and wasn’t very impressed with.

I recalled being bored most of the time and not caring for the characters or the crazy narrative.

It’s for reasons like this, that I’m so glad I sometimes choose to revisit films even after 13 years because my perspective of this has made a complete 180 degree turn.

I really enjoyed this film BECAUSE of it’s crazy narrative and obscure characters.

Yes, we will probably never know if this is really based on a true story or not… but it doesn’t matter because it’s still fun.

I grew up in the 80’s with lots and lots of syndicated reruns and used to love watching episodes of The Dating Game, The Newlywed Game and of course The Gong Show, but I had no clue whatsoever that the creator of these shows (and sometime host) claims to have been a spy for the CIA at the same time.

Do I belive it now?

and frankly, I don’t care.

This was George Clooney’s directorial debit and he does a wonderful job recreated the time periods depicted but the thing I liked the most about this film is that it doesn’t try to prove the thesis one way or another.

Some may believe he was a spy and others won’t, but the film doesn’t rely on a definitive answer to that question for it all to work, what’s important is that Barris himself believed it.

Sam Rockwell is great as the lead character because he is able to play the extremes of Barris’ personality.

In some scenes, he could be normal and in other just completely off the wall crazy.

I liked the added touch of realism by interspersing some interviews with real TV personalities of the time who knew Barris and trying to get out of them the truth.

Ultimately, each and every viewer must decide for him or herself what they want to believe and that’s why this works so well.

Bottom Line -Film that does a great job of presenting the story as is without trying to prove or disprove the seemingly absurd claims of Barris. Rockwell is great in the title role because he is able to go to extremes with the character; he can seem absolutely crazy in some scenes yet quite sane and down to Earth in others. Clooney does a fine job with his directorial debut. The movie adds even more realism when they show us interviews with Barris’ friends and colleagues asking what they believe. I really like how they leave it to us to ultimately decide whether it’s reality or not. Recommended!

MovieRob’s Favorite Trivia – Most of the scenes were done in one take. The NBC lobby scene, and The Dating Game (1965) montage are done completely in one take; the actors ran around to get into position. (From IMDB)