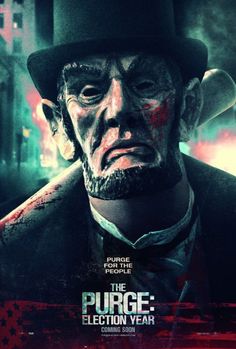 Brief Synopsis – As an impending Presidential election inches closer, the government changes the rules of Purge Night in order to try and rid the country of threatening opposition members.

My Take on it – This is a film that I really enjoyed and liked it better than the previous film in the series because of one main factor:

This film gives us even more insight into the ‘why’ of the whole Purge idea.

Up until now, they have given us the answers to most of the important W questions, but this one really expanded on the why.

Prior to this film, we knew the who, what, where, when and how of it all, but now we can also be content with a better understand of the why of it all.

I’m also glad that most of the cast are not known actors because that gives and even more plausible and believable arc to it all.

Each of the three films in the series give us a different perspective of the Purge Night and this one helps give so much more closure to the whole idea brought forth with these films.

Most people will refer to this film series as horror movies, but this really is juts a thriller based in an alternate future world without any kind of supernatural aspects of it.

Up until now, we have wondered what could have brought upon the country such a “holiday”, but now they have expanded the explanation to us making it seem even more real.

I hope they continue with this series, because they left things open to go in a very interesting direction from here on out.

Bottom Line – Really liked the way this one played out. I thought it was much better than the second one and helped give an anchor to the entire storyline of the series because we now understand more of the why as opposed to just the who, what, where, when and how. Liked the fact that most of the cast are not known actors because it gives the story more credibility and believeability this way. Recommended!

MovieRob’s Favorite Trivia – As of this film, James DeMonaco has written and directed every single film of the series, a rare feat for horror film franchises. (From IMDB)