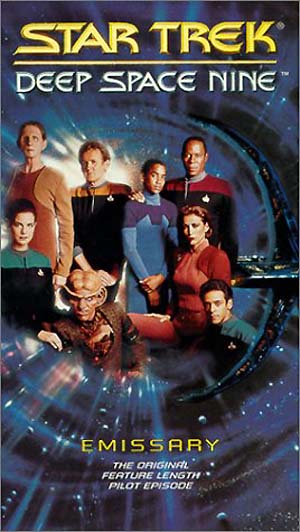 This is the second of 4 reviews for Becky of Film Music Central‘s Music of Star Trek Blogathon.  For this blogathon, I decided to watch and review the pilot episodes of the 4 Star Trek spinoff TV show’s.

Tnx to Becky for running this blogathon!

“That may be the most important thing to understand about humans. It is the unknown that defines our existence. We are constantly searching, not just for answers to our questions, but for new questions. We are explorers. We explore our lives day by day, and we explore the galaxy, trying to expand the boundaries of our knowledge. And that is why I am here. Not to conquer you with weapons, or with ideas. But to coexist… and learn. ” – Sisco

Brief Synopsis – After the Federation takes over control of a space station trying to keep the peace in a former war zone, the new commander finds a wormhole that takes him places never imagined.

My Take on it – After being a huge fan of TNG, I was excited about the spinoff series of DS9, but for some unexplained reason that enthusiasm only lasted about one season.

Afterwards, I did see sporadic episodes here and there but couldn’t even tell you what eventually happened to the story or the characters over its seven season run.

Upon rewatching this, I am reminded at how intriguing and interesting the themes of this show are and how much they are different from the Original Series and The Next Generation.

In those shows, the goal was discover new planets and species, but here the main goal (at least in the beginning) is holding the peace between two warring planets.

I really enjoyed the way that they introduced us to the many new characters here and easily showed us their basic abilities in just 90 minutes.

I have always liked Chief Miles O’Brian on TNG and I am happy that he was transferred to DS9 because it gives a nice sense of continuity to the show.

The theme music of this show is great because it is very subtle and it really helps resonate the subtle themes of the show.

The peace and harmony themes of the show are clearly seen in the music and in a way, it’s a very calming theme which works great here.

Check out the theme here!

Having now watched this pilot show, I can’t wait to finally get thru the 7 seasons of TNG so I can move on to watching this whole show too!

Bottom Line – Nice way to spin off TNG while keeping this very fresh and intriguing. Loved the way the characters are all introduced and we quickly get to know the new life forms and their abilities. Love that OBrian was moved here because it gives us great continuity . The theme music is great because it’s quite subtle and gives us much to think about just by the melody itself. Reminds me that the theme of the show is peace and harmony and not moving fastly around the galaxy. Recommended!