For this month’s next review for Genre Grandeur – Realistic Films, here’s a review of The Contender (2000) by me.

Thanks again to Prime Six for choosing this month’s interesting and unique genre.

Next month’s Genre has been chosen by Diego of Lazy Sunday Movies. We will be reviewing our favorite Psychological thrillers.

When Prime Six first suggested this genre, I was quite excited because it’s such an amazingly unique choice and it’s even more subjective than most other genres.  Most genre’s deal with something that personifies the story of the film itself, but this one solely has to do with how each and every person perceives a particular film. I decided to choose 5 movies that I believe are extremely realistic and each one falls into a completely different “normal” genre.  My final choice is from the genre of political drama… 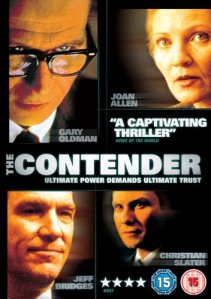 “Principles only mean something when you stick to them when its inconvenient. ” – Laine Hanson

Brief Synopsis – Following the death of the Vice President, the President chooses a female senator to take his place but when rumors surface about her past come up, she must decide whether to defend herself or not from vindictive political rivals.

My Take on it – I love movies that deal with politics and my favorites are the ones that feel so realistic that it could seem as if they conceivably could be ripped right from the headlines.

This film fits that category to a T.

Despite being made 16 years ago, this film still feels relevant today and if it would have been released this year, it would have elicited from me the same feelings as it did a decade and a half ago because it is such a timeless storyline.

Joan Allen was the perfect choice as the main character and she definitely deserved the Oscar nomination for Best Actress for this role.

This film was both written and directed by Rod Lurie who I have always been a fan of.  His movies Deterrence (1999) and The Last Castle (2001) are superb, but this one will always be my favorite among his work because it is so timeless and thrilling to watch the story unfold.

The dialogue is witty, engaging and amazingly scripted.

The conversations are crisp, intelligent and lightning fast.

Loved the way the characters are developed and because they are mostly politicians, you know you can never know who you can trust or what they will do next.

I would be so happy if Lurie would make more movies, because Hollywood is really missing his amazing work.

Bottom Line – This is one of my favorite Political dramas because it feels so real.  Allen was the perfect choice for this role and definitely deserved her Oscar nomination for the role.  Despite being made 16 years ago, this film’s scenario could still be played out today in the exact same manner, so it proves the timelessness of the idea.  Loved the dialogue because it is so crisp and lightning fast.  The characters are all developed quite well and because it’s politics, you never know who you can really trust and what they do next.  Really would love to see more of Rod Lurie’s scripts being made into such amazing films. Highly Recommended!