For this month’s next review for Genre Grandeur – Realistic Films, here’s a review of Tokyo Story (1953) by John Michael Bell of The Sixth Station

Thanks again to Prime Six for choosing this month’s interesting and unique genre.

Next month’s Genre has been chosen by Diego of Lazy Sunday Movies. We will be reviewing our favorite Psychological thrillers.

Let’s see what John thought of this movie: 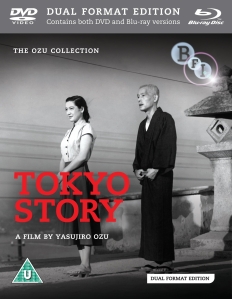 It’s impossible to talk at length about Tokyo Story without getting into some significant plot detail, so here’s a spoiler warning.

It’s kind of funny how Yasujiro Ozu if often cited as a master of realism. If you pick his films apart, you can see his artistic touch on every frame. His compositions are exquisite, for example. There is symmetry and beauty in every shot. When he started making color films, he included the color red in every single shot. Ozu loved style. He just tailored his style to capture the rhythms of everyday life better than just about any other filmmaker. An Ozu film feels as alive as any documentary, much like how the paintings of Edward Hopper felt as alive as photography.

Ozu most displayed his heart in his masterpiece, Tokyo Story. It is as quiet as any of his films. It contains no grand gestures. The beauty of Ozu’s storytelling is how he carefully crafts each character. Through their most mundane conversations we get to know them. As we get to know them, the little moments that are most significant to them begin resonate with us. By the end of the film, their smallest gestures and softly-spoken words resonate with profound meaning.

Tokyo Story tells the story of a family that has been scattered. The inevitable separation of families is the narrative thread that connects most of Ozu’s films. In Tokyo Story, the separation is complete. An elderly couple, Shukichi and Tomi (Chishū Ryū and Chieko Higashiyama), attempt to have a reunion with their two oldest children and their widowed daughter-in-law. The daughter-in-law, Noriko (Setsuko Hara). While their children, both middle-aged and busy with their careers, ignore their parents and gripe amongst themselves about what a burden it is to care for them, Noriko goes out of her way to show them a good time. We learn that Noriko’s husband died during World War II; despite that, she seems to have remained close with her in-laws, who see her as a sort of surrogate replacement for their dead son.

The beats of the story aren’t full of intense drama. Eventually, the parents are shuttled by their children to a spa resort that is clearly tailored for much younger clientele. The parents return home. The mother falls ill, and the children are all summoned home to be with her. To simply recap any Ozu film is difficult; his films comprise entirely of everyday moments. These moments aren’t about the action, but the revelations about the characters that bubble up to the surface.

Consider a remarkable scene where Shukichi goes out drinking with two old friends. As they drink, they begin to argue about whether or not it’s right for them to be disappointed in their children. The conversation, like so many in Ozu films, suggests more than spells out. The characters, speaking more freely than usual thanks to liquor, still speak in the half-hearted suggestion of real life, when truly speaking your mind might be too painful. In Shukichi’s case, admitting his disappointment in the adults his children have become might be an indictment of himself as a father, or perhaps simply a truth too harsh to want to admit.

The last act of Tokyo Story is absolutely heartbreaking. More so to me now, having been through the death of my mom this year. Ozu handles it without an ounce of melodrama. There is a moment that is seared into my memory; when the oldest son, a doctor, gravely declares that his mother likely won’t survive the night, his sister breaks out in a sudden wail. Her reaction is one of both heartbreak and deep regret. I’ve lived that moment myself. Death doesn’t always grant the survivor the chance to say goodbye the way you want, the way movies have made us expect.

The rest of the film is process of dealing with the immediate aftermath of loss. It is, as all Ozu films are, specific and unwaveringly true to these characters. The lack of sentimentality doesn’t mean that it has no heart. Like all Ozu films, his deep understanding of human nature pulses as the blood in the film’s veins. Some characters will disappoint us. Some will make us smile sadly. But no matter they do, we will understand. And above all, we will want the best for them, no matter how unlikely that is to happen.