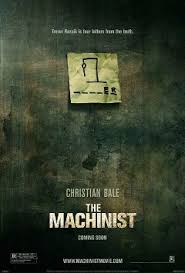 Next month’s Genre has been chosen by Diego of Lazy Sunday Movies.  He has chosen another great genre for this coming month.  We will be reviewing our favorite Psychological Thriller Films.

“How can you wake up from a nightmare if you are not asleep?” – Trevor

Brief Synopsis – A machine workers who hasn’t slept in nearly a year tries to find a way to understand what is real and what is his imagination… is he dreaming or slowly becoming insane?

My Take on it – This is a movie that I’ve heard about for years but had no real desire to see because as much as I love Christian Bale as an actor, I had always perceived this film as a horror film.

Diego convinced me that this is more of a psychological thriller.

I decided that in order to make my guest choices of the Genre for the Genre Grandeur series more personal (and expand my own personal horizons of these genres), I will take a recommendation from my guest for a film to watch for this Genre Guesstimation series.

This film was Diego‘s choice for me to watch.

First off, this movie is a great example of how dedicated an actor Bale really is.  He lost an absurd amount of weight for this role, which in and of itself is both astounding and ridiculous at the same time.

The story unfortunately takes a bit too long to get to it’s point and is a bit taxing getting there.

Once it does get there tho, things turn around and it’s amazing watching the pieces of the puzzle fit together.

Because this is a very dark and depressing movie, it isn’t one that I really could say that I plan to rewatch in the near (or even distant) future for the time being.

That being said, this movie is still worth seeing at least once because it really is an interesting mind twister and clearly fits into this months genre perfectly!

Bottom Line – Bale gives a great performance here.  The story takes a bit long to get going, but once it does, it’s great how they put all the pieces together. Not the kind of film, I’d rewatch so quickly because of it’s dark and depressing undertone, but still worth seeing at least once. Bale’s weight loss for this film is astounding, yet absurd at the same time. Recommended!

MovieRob’s Favorite Trivia – The producers of the film claim that Christian Bale dropped from about 173 pounds in weight down to about 110 pounds in weight to make this film. They also claim that Bale actually wanted to drop down to 100 pounds, but that they would not let him go below 120 out of fear that his health could be in too much danger if he did. His diet consisted of one can of tuna and an apple per day. His 63-pound weight loss is said to be a record for any actor for a movie role. He regained the weight in time for his role in Batman Begins (2005). (From IMDB)

Genre Grandeur Worthy? – Not really.  It’s not the kind of movie that I would want to rewatch so quickly despite having an interesting premise once it’s all put together.