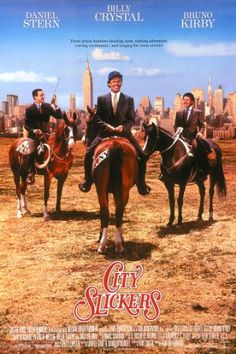 “Let’s have some peace and quiet around here, for chrisakes! I’ve been under a lot of stress! I lost my wife, I lost my job, and I’m developing some kind of rash from making in the bushes!” – Phil

Brief Synopsis – Three middle aged friends venture off on a cowboy excursion in order to try and find themselves.

My Take on it – I have been in love with this film ever since I first saw it 25 years ago.

It found a way to expertly balance the dramatic and comedic moments so that it doesn’t get too heavy but still feels serious enough.

The way they handle the subject of a mid life crisis is amazing and this is perhaps one of the best films from that theme because the characters are so relate-able to so many people.

This film has an amazing cast but is spearheaded by Billy Crystal who completely makes this film work.

His real life friendship with co-star Bruno Kirby helps make the characters seem so real because of their true friendship.

Loved how this film doesn’t try and pander to the audience and discusses and deals with  its themes openly.

This film is so much fun and it really is Crystal at his very best!

Bottom Line – One of the best movies about dealing with a mid life crisis. Gets the balance between comedy and drama perfectly right. Crystal was a superb choice for the lead because he excels in roles like this. Excellent supporting cast. Doesn’t pander to the audience and openly discusses and deals with issues that so many people can relate to. Highly Recommended!

MovieRob’s Favorite Trivia –  The story that Billy Crystal tells about his “best day” of going to a Yankee game with his father is a true story from his childhood. He notes at one point that, “I still have the program.” Not only does he really still have it, but he got Mickey Mantle to autograph it twice: once at the game that day and once again some 20 years later on a talk show they were both guests on. (From IMDB)