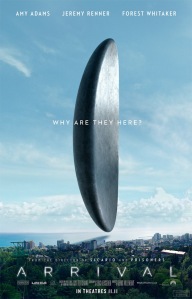 Brief Synopsis – After 12 mysterious UFO’s land all over the world, the world governments try to figure out who they are and why they have come to Earth.

My Take on it – I’m a big fan of sci-fi films and I generally prefer sci-fi films where there is a lot of action and adventure.

There is something to be said tho for sci-fi films like this one which are much more cerebral and expect us to think about what is going on instead of just sitting back while munching on our popcorn.

I saw this film nearly a week ago and I’m still thinking about everything that happened and I keep pondering what the meaning of certain parts of this film are trying to tell us.

The cast of this movie does a great job of making the storyline seem much more realistic and believable.

The casting choices of Amy Adams, Jeremy Renner and Forest Whitaker are all great ones and it was enjoyable watching their performances here.

The themes of unity are quite prevalent here whether being discussed on a personal, national or global level and makes me think that perhaps there is a lot to the idea of the Star Trek Federation… perhaps??

Certain twists in the film work better than others, but overall, we are left with a compelling and realistic story that takes us places we don’t expect.

I will be mulling this movie over for quite some time….

Bottom Line – Very good cerebral sci-fi movie that gives us so much to ponders for days afterwards. The cast is excellent with Adams, Renner and Whitaker helping to make it all seem much more realistic. Great themes about unity. Certain twists work better than others, but overall it’s a very compelling story that takes things places where we don’t quite expect. Recommended!

MovieRob’s Favorite Trivia – Ted Chiang, who wrote the novella the film is based upon, approved the film, saying, “I think it’s that rarest of the rare in that it’s both a good movie and a good adaptation… And when you consider the track record of adaptations of written science fiction, that’s almost literally a miracle.” (From IMDB)