For this month’s next review for Genre Grandeur – Scottish Films, here’s a review of Morvern Callar (2002) by Reut of Moody Moppet

Thanks again to Gill of WeegieMidget Reviews for choosing this month’s genre.

Next month’s Genre has been chosen by Becky of Film Music Central. We will be reviewing our favorite Cyberpunk Movies.

Cyberpunk is a subgenre of science fiction in a future setting that tends to focus on society as “high tech low life” featuring advanced technological and scientific achievements, such as information technology and cybernetics, juxtaposed with a degree of breakdown or radical change in the social order.

Please get me your submissions by the 25th of Dec by sending them to cyberpunkbecky@movierob.net  Try to think out of the box! Great choice Becky! 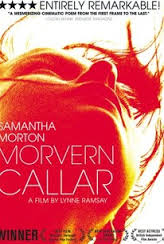 First off, super thanks to MovieRob’s for another awesome Genre Grandeur, and this month’s topic is dedicated to our favorite Sco-ish films, chosen by Gill of WeegieMidget Reviews. Awesome choice, Gill!

I picked the 2002 film Morvern Callar, a strange drama of a young woman that discovers her boyfriend had killed himself over a Christmas night, living her a note, a mixed tape and his unpublished novel, which was dedicated to her. Isolated in her thoughts Morvern delicately strokes her boyfriend body and after remains calm enough to get dressed, collect loose change and walk to a phone booth to call the police and ambulance when she then changes her mind, sits on a bench and gets up again to answer the phone and speak with a random caller. This is where you slowly raise your eye brow. Morven returns home, takes a shower, puts on a black dress and make-up, takes money from her dead boyfriend’s pocket and parties all night.

Morven Callar is a Scottish film. With a name like that it has to be. It’s a slow film that truly deserves your attention. It’s dark, dramatic with a humorous touch and punk rock brush strokes. Samantha Morton is at her best. Repeatedly focused on by the camera, Morton depicts an emotionless woman, isolated in her own thoughts. Her behavior over the unexpected suicide of her lover is quite unconventional as if his death was her new beginning. Instead of grieving, she takes advantage. Sells his novel under her name, books a trip to Spain with his money and always, always polishing her nails red, as if some sort of a ritual. Whether or not she’s disconnected, unaware, doesn’t care, we don’t really know. It’s almost like trying to figure out a sociopath. It’s only in the first scene when we notice a glimpse of intimacy. You have no idea where this is going or what the fuck she’s doing or why she’s doing it, which is exactly why you want to keep watching. There’s no climax just a quiet and riddled observation of a strange conduct by a strange girl.

The entire style of the opening scene is eerie and dark. Nothing but flickering pink lights of a Christmas tree, a bleeding dead body and a young woman lying next to it. It’s that feeling of discomfort I think director Lynne Ramsay was trying to accomplish and so she did – big time! The silence drives you mad, especially if you lack patience like me, but that’s it, you see, that’s why I was so busy debating myself whether I liked it or not. And I won. I liked it because it cleverly pulls you out of your comfort zone. I think the novel was a lot more subtle and Ramsay took a chance to revamp and dramatize the story even more. Originally the story’s told from with a first person narration, a thing Ramsay chose to overlook. And rightly so, in retrospect. Kudos for the soundtrack, Lynne. Some scenes are followed by great songs that super increase the tension, a.k.a I’m Sticking with You scene by The Velvet Underground. A brilliant song to a brilliantly unsettling scene. No spoilers, though.

In short, Morvern Callar is a great film with a bitter-sweet taste that violently pulls you out of your comfort zone. Not a horror or a thriller, just a drama. A well-made quality slow drama with a great soundtrack.

And now, who chose this genre?? I went nuts trying to understand the heavy sco-ish accent without subs. Ahh, it was VERY challenging. I swear I could only understand Morton’s delicate English and nothing more. Heavy reading between the lines I did. And yet, highly recommended WITH SUBS.