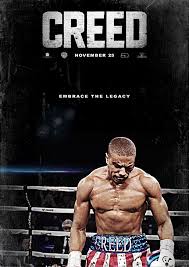 “[pointing toward Adonis’ reflection in the mirror] That’s the toughest opponent you’re ever going to have to face. ” – Rocky

Brief Synopsis – The son of Apollo Creed contacts Rocky in order to have him train him.

My Take on it – When I saw this film last year, I enjoyed it a lot, but felt it was missing something to take it to the next level.

Upon rewatch, I finally saw that spark that I must have missed back then.

This film takes the baton from the Rocky movies and gives us once again a modern boxing underdog who is searching for something in his life.

This time, he is searching for his identity and they maneuver the characters through the story in a fun way but still keep the mark on that overall theme of identity.

Michael B. Jordan was a great choice as the new lead and he does an excellent job here.

It was great watching Rocky once again on the screen despite the fact that the character has aged a lot since the last time we saw him.

Stallone does a wonderful job here and shows how despite being the leading man in so many movies over the years, he also knows how to take the back seat when necessary.

His performance here garnered him many nominations and awards last year but he missed out on winning the Oscar for that role despite much sentiment over the performance here.

This is a boxing film for the new millennia and despite new technologies, they still keep the fundamentals of a boxing film within their sight throughout.

If this is the direction they are going, I can’t wait to see where it takes us when the sequel to think film comes out next year!

Bottom Line – A Rocky film back at the top. This movie deals so much with the theme of identity and it really resonates so much throughout.  Great job by Jordan in the lead and it was so much fun watching Rocky back on screen again despite now being much older.  Stallone shows here that he knows how to take the back seat when necessary and deserving was nominated for Best Supporting Actor in this film despite not winning the award in the end.  Great fighting scenes that show how modern things have gotten, yet keep the fundamental aspects of a boxing film throughout. Can’t wait to see where they plan to take this story in the coming sequel.  Highly Recommended!

MovieRob’s Favorite Trivia – While training, Adonis wears a shirt with the message “Why do I wanna fight? Because I can’t sing and dance…” This was a line from Rocky to Adrian on their ice skating date in the first Rocky (1976). (From IMDB)