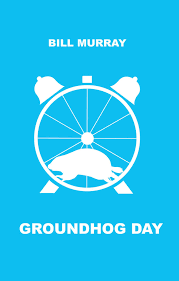 “I killed myself so many times I don’t even exist anymore.” – Phil

Brief Synopsis – A weatherman covering the annual Groundhog Day festival in rural Pennsylvania gets stuck in some kind of time war and must keep reliving the same day over and over again.

My Take on it – Who would have thought that a film that revolves around one day that happens over and over would be able to remain unique, fresh and original throughout, but this film manages to do so quite easily.

Bill Murray is a great choice for the lead and is able to play the character as both a good or bad guy equally which adds so much to the performance.  Due to his constant change in attitude throughout the movie, you really just don’t get tired of his performance.

I love the message of this film because it is fun to not only watch the changes in the main character, but also we get to see how the whole town evolves along with him as things progress.

Andie MacDowell is a nice choice as the female lead and she and Murray have fun chemistry together.

They get the right mix of comedy and drama here and it shows by the way this all works so well.

Bottom Line – Murray’s best role ever.  He was perfectly cast as the cynical Phil Connors and you don’t get tired of watching him in this role.  The message of the film is a fun one to watch unfold because we get to see not only how the character evolves, but also how the town evolves along with him. MacDowell is great as the female lead and she works really well together with Murray.  The idea that the same day could be filmed over and over and still remain original and fresh throughout the whole film is done amazingly.  Highly Recommended!

MovieRob’s Favorite Trivia – According to director Harold Ramis, most of the times when he tried to explain a scene to Bill Murray, Murray would interrupt and ask, “Just tell me – good Phil or bad Phil?” (From IMDB)