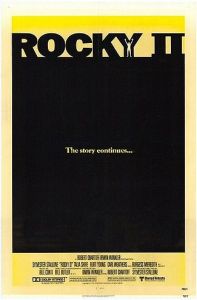 Brief Synopsis – Rocky and Apollo Creed have a rematch to decide who truly is the better fighter while Rocky still needs to learn to deal with his newfound fame.

My Take on it – This is a pretty good sequel, but still isn’t as great as the original film.

They chose an interesting way to continue the saga of Rocky’s life both in and out of the ring.

I enjoyed once again watching how the simple and humble fighter needed to learn how to deal with his new found fame while also dealing with raising his new family.

The film does have some slow parts to it and I think a few scenes could have been tighter and cut down a bit, but overall, it is a fitting continuation to the story begun in the previous film.

The film isn’t as meaningful as the original, but it still has some great scenes in it, especially the scenes in the ring.

I enjoyed the way that Rocky and Adrian continue their lives as the world around them rapidly changes for them in so many different ways.

When looking at the series as a whole, this film definitely helps move things along in the right direction.

Bottom Line – Interesting way to continue this story.  Like how the humble and simple Rocky needs to learn how to deal with his new life of overnight fame. Is a bit slow at certain points and probably could have cut down a bit. Nowhere near as meaningful as the original despite having some great parts of it. Liked how Rocky and Adrian’s lives continue along slowly as his fame progresses also.  Great fight scenes help make this still enjoyable to watch. Recommended!

MovieRob’s Favorite Trivia – Analysis by Philadelphia locals tracked the route Rocky took through the city during his training run when all the children ended up running with him. If he took this actual route from his South Philly house to the top of the Art Museum steps he would’ve run approximately 30.2 miles in one day – 4 miles more than a marathon. (From IMDB)