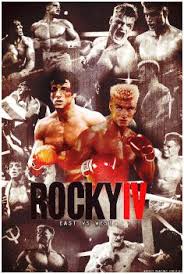 Brief Synopsis – Rocky challenges a Russian menace to a fight in Russia in order to enact revenge after a friend is killed during an exhibition match.

My Take on it – I recall seeing this film in the theater not long after it came out in ’85 and it has always had a warm place in my heart despite not being the best in the series.

We once again get to see how Rocky deals with the ups and downs in his life both in and out of the ring and it’s mostly done quiet competently here.

This film is more of a reminder of the patriotism of America during the height of the final days of The Cold War instead of being considered a great and serious boxing film.

Dolph Lundgren is excellent as the Russian fighter Drago and remains scary to watch even after three decades.

Once again, great choice of music helps move things along at such a great pace.  Burning Heart is my favorite song used here.

The story arc of Rocky begins to really lose it’s way with this film, but despite this, it is such a fun film to watch.

Bottom Line – More of a patriotic film during the height of the Cold War instead of a serious boxing film, but it will always have a warm place in my heart. Lundgren is great as Drago and still seems extremely menacing 30 years after this film was made.  The story of Rocky loses its way a bit here, but still a fun film to watch. Recommended!

MovieRob’s Favorite Trivia – Rocky IV was the highest grossing film in the Rocky series, taking some $300 million worldwide. (From IMDB)