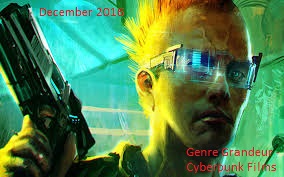 For this month’s first review for Genre Grandeur – Cyberpunk Films, here’s a list of the best Cyberpunk films compiled by Dan of Slipthrough Movies

Thanks again to Becky of Film Music Central for choosing this month’s genre.

Next month’s Genre has been chosen by Catherine of Thoughts All Sorts. We will be reviewing our favorite Westerns set in the “old West” – so, that excludes Contemporary Westerns i.e. No Country for Old Men, Hud, Desperado, Junior Bonner etc.

Please get me your submissions by the 25th of Jan by sending them to oldwesterncat@movierob.net

Try to think out of the box! Great choice Catherine!

Let’s see what Dan thinks of this genre:

The sub-genre has a lot of influence from literature, yet cyberpunk films are usually rather cinematic, filled with atmosphere and dripping with style. As a huge fan of sci-fi and darker stories, I have a few recommendations.

On the b-movie scale, before Keanu Reeves went blockbuster cyberpunk with THE MATRIX (1999), he starred in the guilty pleasure cult classic JOHNNY MNEMONIC (1995). He played a ‘courier’ of data. With an implanted hard drive in his brain, he is hired to get secret information across dangerous territory. Fun for what it is, with some big ideas.

Another way back retro cyberpunk cheeser was VIRTUOSITY (1995) starring Denzel Washington and introducing Russell Crowe to Hollywood as an over-the-top villain. One of the grimiest of the sub-genre was hidden gem cult classic HARDWARE (1990).

The best cyberpunk movie ever is Ridley Scott’s BLADE RUNNER (1982), starring Harrison Ford as a bounty hunter who tracks down unruly cyborgs that are indistinguishable from humans. What helped make this legendary film so groundbreaking was its internal exploration of morality. What happens when an artificial human realizes it will die one day? The resulting thriller is filled with incredible ideas and intense action. One could write a novel reviewing this astounding feature film. Expect the conversation to re-ignite with the upcoming sequel directed by Denis Villeneuve (SICARIO and ARRIVAL). Ryan Gosling stars alongside Harrison Ford in what already looks like an amazingly compelling film from the recently released, beautifully cinematic, sneak preview teaser.

I hope this brief and nerdy breakdown helps direct new cyberpunk fans in the right direction. There have been some really intriguing films on the subject, most recently stuff like EX MACHINA (the best movie of 2015), but nothing compares to the grand-daddy of ’em all – BLADE RUNNER (inspired by Philip K Dick’s novel DO ANDROIDS DREAM OF ELECTRIC SHEEP).

As our present day slowly reflects the imaginary worlds, these cyberpunk films become all the more relevant… and creepy.