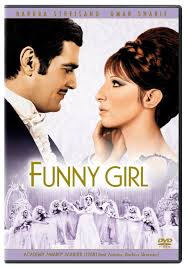 “I’m a bagel on a plate full of onion rolls! ” – Fanny Brice

Brief Synopsis – Biopic of  comedienne Fanny Brice and her influence on vaudeville both on and off the stage.

My Take on it – When going through the list of Best Picture nominees, I was actually quite surprised that this was one that I had never seen.

Despite being surprised, I had no clue what this film was about and was quite interested to see the film that helped cause the only tie in Oscar history for a acting award.

Barbara Streisand is great in this film and really shows that she can lead a film depsite this being her very first role ever.

Her Oscar win for Best Actress was well deserved.

The thing that baffles me a bit was her pairing with Omar Sharif (who I have always liked) because the chemistry between them doesn’t seem genuine enough.

This is actually quite ironic because supposedly they started an affair while making this which caused Streisand’s divorce from Elliott Gould.

This film has a great mix of comedy and drama and some of both can even lead one to tears because they are done exceptionally well.

The problem with this film tho is the fact that it runs a bit too long and drags way too much during the second half.

The music and choreography is great here and both help this film along to way to keep things interesting.

Bottom Line – Has some really funny scenes that are weighed equally with some touching and even dramatic scenes, but goes on a bit too long and drags a bit towards the end.  Streisand is truly great in this film, but I didn’t think she and Sharif had enough chemistry to be paired together.  Has some great songs that help it along the way.  Streisand definitely deserved her Oscar for this role.  Recommended!

MovieRob’s Favorite Trivia – A publicity photo of Omar Sharif and Barbra Streisand kissing was released to the newspapers. With the emotions of the Six Day War still running high, the Egyptian press began a campaign to get Sharif’s citizenship revoked over the kiss. The Egyptian headline read: “Omar Kisses Barbra, Egypt Angry.” When asked to respond to the controversy, Streisand tried to make light of it. “Egypt angry!” she said. “You should hear what my Aunt Sarah said!” (From IMDB)