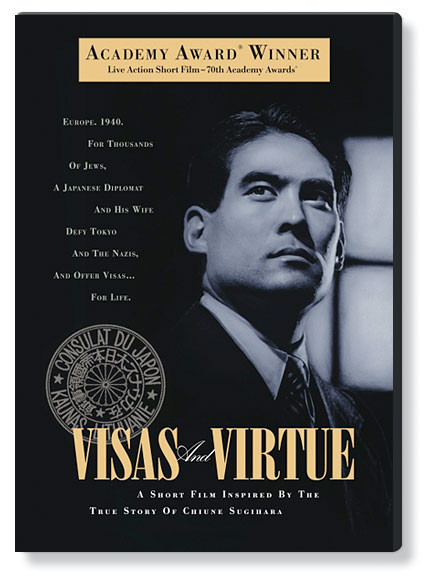 “Even a hunter cannot kill a bird which flies to him for refuge.” – Yukiko Sugihara

Brief Synopsis – Short film that tells the story of a Japanese diplomat and his wife’s desire to save Lithuanian Jews while serving as Ambassador in 1940.

My Take on it – Some times, some of the smallest true tales can be the most poignant to watch.

This film won an Oscar for Best Short Film in 1997 and it’s so interesting to watch because it’s done so simply.

It’s baffling to believe that a foreign diplomat would risk his own life and his families life for virtual strangers, but that’s exactly what they did; they issued exit visas to Jews who had no where to go and saved them frome xtermination by the Nazis.

Despite being only 23 minutes long, we get a clear sense of the how and why this diplomatic couple risked everything in order to keep their honor even if it meant to go against their own duty.

Bottom Line – Great tale, told so simply. The idea that a foreign diplomat would risk his life and the life of his family in order to save virtual strangers is unbelievable.  This is done so well because we get to understand how such a thing could have happened.  Love the message of honor over duty.  Definitely deserving winning an Oscar for Best Short Film in 1997.  Highly Recommended!

MovieRob’s Favorite Trivia – Hanni Vogelweid (Sondheimer), who makes a “Special Appearance” as Elderly Woman at Interview, received a life-saving visa from Sugihara when she was 17 years old, which allowed her to escape Lithuania with her family in 1940. She helped with research for the film by sharing family photos and talking about her experience. She passed away in 2006. (From IMDB)