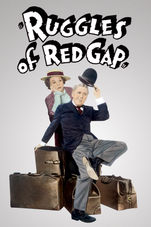 “Don’t let’s get into difficulties about this. But you must listen to an Englishman about tea. If it were coffee I should be your pupil. Where making tea – and WHEN making tea – always bring the pot to the kettle and NEVER bring the kettle to the pot. ” – Ruggles

Brief Synopsis – An English Butler is won in a poker game and must travel with his new ‘masters’ to live and serve them in the Wild West.

My Take on it – When thinking of movies nominated for Best Picture over the past 89 years, it was shocking to see a film with a title like this on the list.

BUt when you actually watch the film, it’s completely understandable that it would appear on this famed list of nominees along with so many other amazing movies.

The concept here works so well and it can be seen on so many levels.

This film seems to try and make a joke of the way that the class system works (both in England and in the US) but it really shows us how and why things changed.

They have some very clever scenes that show us the absurdity of it all, yet it is all done quite classy.

Charles Laughton is great in the title role because even when he tries not to be funny, he succeeds in making us smile or even laugh because his character is so witty and on the mark the whole time.

His rendition of The Gettyburg Address is quite tearful because it can be interpreted in numerous ways.

This is such a great film and really was deserving of the honor of being nominated.

Bottom Line – Excellent concept that works so well on numerous levels. Loved the way it looks at class structure and while seeming go make a mockery of it all, it has some very clever points about it. Laughton is great in the title role and is both funny and witty the whole way through. Highly Recommended!

MovieRob’s Favorite Trivia – Edward Dmytryk, the film’s editor, said that Charles Laughton became so emotional during the scene in the saloon where he recites the Gettysburg Address that it took director Leo McCarey 1-1/2 days to complete shooting it. According to Dmytryk, the preview audiences found Laughton’s close-ups in the scene embarrassing and tittered through the speech. When substitute shots of Laughton from behind were inserted, the audience found the reaction shots of the other people reacting to him very moving, and the second preview was extremely successful.  (From IMDB)