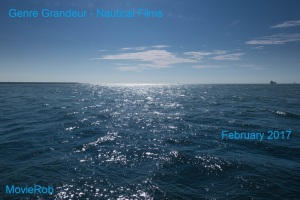 For this month’s first review for Genre Grandeur – Nautical Films, here’s a review of The Abyss (1989) by Ryan of Ten Stars or Less

Thanks again to Sean of SeanMunger.com for choosing this month’s genre.

Next month’s Genre has been chosen by Jay of Life Vs. Film (and head Shepard of the LAMB).  We will be reviewing our favorite Prison Film(s).

Please get me your submissions by the 25th of Mar by sending them to sendjay2prison@movierob.net

Try to think out of the box! Great choice Jay!

Let’s see what Ryan thought of this movie:

One can only imagine how the Abyss would play out like today, given the advancements in CGI and under water travel. This film was shot in 1989 and shows how creative special effects were back then and what James Cameron was capable of. The Abyss is a long movie, clocking in at almost three hours, but that’s because there is a lot to the story to tell and each character is given plenty of screen time to get deeply involved in the overly dramatic plot. Loyalties will be tested at every turn as the crew digs deeper and deeper into the abyss to see what’s out there.