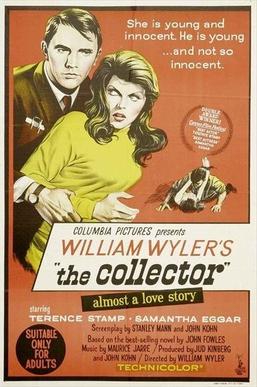 Brief Synopsis – A young man obsessed with a woman from his neighborhood decides to kidnap her and keep her prisoner.

My Take on it – This is a film that I hadn’t even heard of until recently and was shocked to learn that Terrance Stamp acted so well back then (and even had a full head of hair).

The themes dealt with in this film are quite emotional and mostly were themes considered taboo at the time that it’s quite amazing that they manages to get it made when they did.

The two leads are superb with Stamp and Samantha Eggar carrying the whole film by themselves.

Their interactions and conversations are extremely interesting to watch and listen to because it all feels like a deadly game of chess between them.

The roles of warden and prisoner are too strict to describe the relationship between the two, but still seems a bit apt.

Stamp gives us an amazing portrait of a very disturbed man and Eggar is equally amazing as a young woman doing all she can to escape the madman.

The story itself moves a bit slowly, but the verbal debates between the characters helps things stay interesting the whole time.

They do a great job keeping things moving despite the fact that most of the film takes place within a solitary house.

The whole film is actually quite disturbing to watch, but it is done in such a way that it draws us in because we want to know what will eventually happen.

Bottom Line – Very interesting film because it deals with subject matter that was considered taboo at the time. Stamp is amazing as this very disturbed young man and Eggar is equally great as his prisoner.  The story moves a bit slowly, but still works quite well.  Very disturbing to watch yet done in a way that we are very curious to see what will happen. Recommended!

MovieRob’s Favorite Trivia – This film was cited by notorious serial killer Bob Berdella as a key inspiration for his crimes.  (From IMDB)