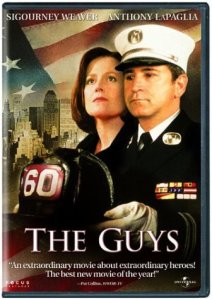 “I knew then that every time I saw a person on the street, I saw only his public shadow. The rest, the important part, lived in layer after layer beyond my view. We have no idea what wonders are hidden in the people around us.” – Joan

Brief Synopsis – A NYC Fire Captain who lost 8 of his men in the 9/11 attacks contacts a writer to help him write the eulogies for his men.

My Take on it – This is a film that I saw once years ago and it really had a lasting impression on me.

I came across the title again recently and really wanted to see it again.

I was once again amazed at how well this film was made because it is able to take an event that most of us are quite familiar with and makes it extremely personal.

The whole film is basically a series of conversations between two people and because the dialogue is superb, one never tires of listening to the back and forth between them.

Sigourney Weaver and Anthony Lapaglia are both great in these roles and they add an even more powerful emotional punch to the storyline.

They are easily able to give us a sincere and clear picture of the 8 different men described here.

This film is quite amazing because of the fact that it was made so soon after the events it depicts yet still is able to be so emotionally captivating even 15 years after the events of 9/11.

It’s quite interesting to note that this is the only Full length cinematic Directing credit for Weaver’s husband Jim Simpson since he was the original director of the stage play that this film is based on.

The song Dawning by the Day is quite an emotional way to end this film and Mary Fahl does a great job vocalizing the song.

Bottom Line – Amazing film that takes an event that we all know about and succeeds in making things even more personal.  Weaver and Lapaglia are both superb here and you never get tired of just hearing the two of them talk.  So amazed that this was done so soon after 9/11 and still manages to be so emotionally captivating even 15 years later.  Highly Recommended!