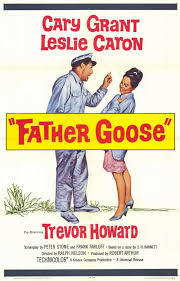 Thanks to Michael E. for this recommendation.

Brief Synopsis – During World war II, a fishing boat captain is persuaded to volunteer to live on an island tracking Japanese military movements for the allies.

My Take on it – This film really surprised me.

I had absolutely no idea what I was getting myself into when Michael suggested this film and had no inkling as to how great and enjoyable this experience would be.

Carey Grant (to me) is mostly known to excel at very serious characters and here he does a wonderful job as one that seems quite against the type of role that we are used to seeing him portray.

His comedic timing is perfect and despite the somewhat serious nature of the overall plot and situation he is in, he comes across as quite laid back and humorous.

The dialogue is done really well because it is quite witty, clever and is filled with the kind of double ententes that work so well the whole way through.

They manage to present the story extremely well because they are able to take a serious situation and “lighten” the atmosphere a bit with some humor, but still retain the gravity of the war going on around.

Grant has great chemistry with Leslie Caron and Trevor Howard and their conversations are also interesting to watch in order to see where they will go; the dialogue between these characters seem realistic in the situations they find themselves in.

Bottom Line – Grant is amazing against type here and does a wonderful job in this comedic role.  The dialogue is extremely funny and witty and the double ententes keep coming all along.  The story itself is also presented quite well because we get to see a war film that takes a serious subject matter and peppers in some added humor to keep things a bit light, yet we constantly still see the gravity of the situations that the characters are placed in.  Grant and Caron have great chemistry together and it’s easy to believe the interactions between the characters.  Highly Recommended!

MovieRob’s Favorite Trivia – This movie won an Academy Award for Best Original Screenplay. Oscar Best Picture nominees often get nominated for (and frequently win) a screenplay award as well. In this year, all five Best Picture nominees were nominated for Best Adapted Screenplay, making the field’s competition for the Oscar somewhat easier. (From IMDB)