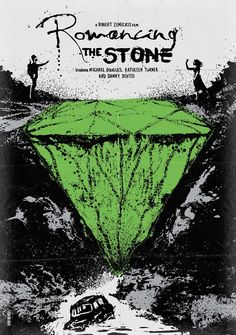 Thanks to Kim of Tranquil Dreams for this recommendation.

Here are her thoughts on the film.

“One hell of a morning has turned into a bitch of a day! ” – Jack

Brief Synopsis – A famous romance novelist must travel to South America to help her sister who has been kidnapped for ransom.

My Take on it – Michael Douglas and Kathleen Turner were perfectly cast in these roles here because they play off one another so well.

Their characters are complete opposites yet they have such amazing chemistry that it’s hard to deny how well it works despite the way they constantly clash throughout the film.

Danny Devito is superb in a hilarious role as one of the kidnappers and eventhough one would think that he wouldn’t work in that role, he manages it splendidly.

The locale of South America works really well to add to the adventurous spirit of the film and keeps things feeling exotic.

This film may seen like an Indiana Jones type ripoff, but it easily is able to stand on its own and works on numerous levels.

I actually forgot that this film was made by Robert Zemekis and was surprised to see his name in the credits as director.

He is able to give this film its own identity and had they had better stories, these characters definitely had potential for more adventures, but when the sequel didn’t work, they scrapped the whole idea.

Bottom Line – Douglas and Turner are great together because their characters clash so much yet still have the right amount of chemistry to make it work. Devito is hilarious in his role here which is so different from what he is famous for. The landscape of South America helps add to the adventurous spirit of the film. Despite it feeling like an Indian Jones type film, it works really well on its own. Recommended!

MovieRob’s Favorite Trivia – Studio executives were so sure this film would flop that Robert Zemeckis was pre-emptively fired from directing Cocoon (1985). It turned out to be such a success that Zemeckis was able to go forward on his own project, Back to the Future (1985). (From IMDB)