Thanks to Robert H. of  If it happened yesterday it’s history for this recommendation. 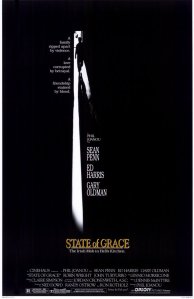 Brief Synopsis – Aftet a ten year absence, a man returns to his old Irish neighborhood of New York and quickly resparks his friendship with his former best friend who’s brother is now the boss of the local Irish mob.

My Take on it – This is another film that for some reason I never got around to see.

My one slight complaint is that Harris feels a bit miscast as a seemingly violent and powerful crime boss.

The story is quite thrilling and suspencrful the whole way thru and is filled with surprises.

Thrre are a lot of unique plot devices used here and it keeps things interesting the entire time.

Bottom Line -Amazing cast really helps this story become something even more than expected. The story is full of surprises and keeps the suspense going throughout. The one casting decision that may have been slightly off was Harris as the mob boss. Story is quite unique and works really well. Recommended!

MovieRob’s Favorite Trivia – Several incidents in the film are based on actual testimony given by captured mobsters. The meeting in the restaurant with the Italian mobster and the dead man’s hand sequences are based on the recollections of various New York gangs. (From IMDB)