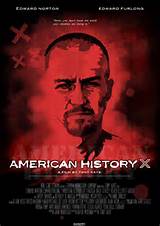 For this month’s first review for Genre Grandeur – Prison Films, here’s a review of American History X (1998) by Kira of Film and TV 101

A neo-Nazi skinhead comes out of prison with intentions of turning his life around and stopping his younger brother following in his footsteps.

Daniel Vinyard (Edward Furlong) idolises his brother Derek (Edward Norton). He is eager to impress his older sibling upon his return home from prison by proving that he is ready to join the DOC – a group of white extremists established by Derek after the murder of their father by a black citizen years before. However, Derek’s experiences in prison have made him realise that there are enough problems in the world without people like him adding to them. He decides to change his ways, but he has more trouble convincing others of his decision. When he finally converts his brother and things start looking up for the boys and their family, it may unfortunately be too late.

American History X, despite what the brief synopsis that comes with it suggests, is a real tale of brotherly love. As soon as the phrase ‘neo-Nazi skinhead’ comes into play. I know most people – including myself – would be expecting violent, hate-fuelled racial attacks and all manner of other things that wouldn’t have been frowned upon by Hitler. But I have to admit I was surprised, and pleasantly at that, by what was actually delivered by this film. It was a highly intelligent story of a man trying to re-adjust to life on the outside after committing a brutal crime. It also showed the point of view of his idolising younger brother who, wrongly, wanted to be just like him. Finally, and I think most importantly, American History X portrayed how much influence such cults and groups can have on impressionable and vulnerable people. This film had the potential to go badly wrong – after all, the subject matter is extremely volatile and the majority of what goes in the film is very racially motivated. But the sensitivity and intelligence with which the whole thing is handled makes for heavy-going, but very thought-provoking viewing.

The foundations for this are made by excellent lead performances. Furlong, who plays Daniel, shows just how easy it is for these groups to brainwash people. The way he spoke about minority groups with his brother’s friends was chilling, and the eagerness he appeared to have for involvement with the DOC was just frightening. Furlong spoke some of his lines in a very unemotional way that made it seem as though the way these people behaved was nothing out of the ordinary, which made it all the more disturbing. However, it was a cracking role he played, and I very much enjoyed watching him.

Norton as Derek was absolutely terrific. After only having watched him previously in Fight Club, where I didn’t particularly like his character, I didn’t really have any real expectations of Norton. However, I would very much like to see him in other things now after seeing American History X. The way in which he tackled the character of Derek was nothing short of amazing. You experienced everything with Derek – the crime, the time and freedom. You actually felt it all. He was brilliant, and his Oscar nomination was very well deserved, and I would like to have seen him receive, and the whole film in fact, a lot more recognition for the hard work gone in.

The film transitions constantly from the past to the present. The difference in time was shown by using a black and white filter over the ‘past’ scenes, which I thought could’ve represented a number of things. For me though, it showed how, perhaps, in the time between the murder of their father and Derek’s release from prison, neither of the boys were really seeing clearly, and that is why they made some of the decisions they did.

Overall, American History X is a very, very good film. It is a film that you certainly won’t forget in a hurry, that’s for sure. Strong performances and brilliant story-telling have a habit of sticking in your mind, plus you won’t be able to get over that ending too quickly either. Go ahead and watch it.