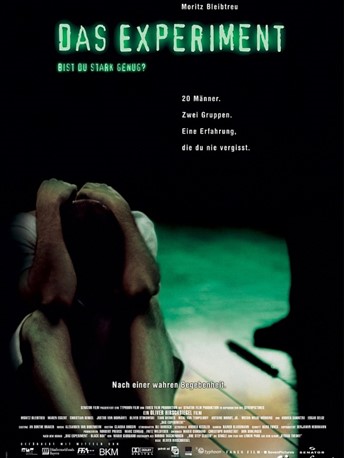 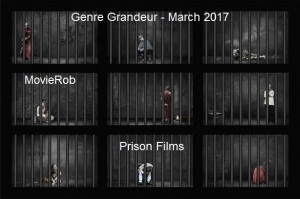 For this month’s next review for Genre Grandeur – Prison Films, here’s a review of Das Experiment (2001) by Catherine of Thoughts All Sorts 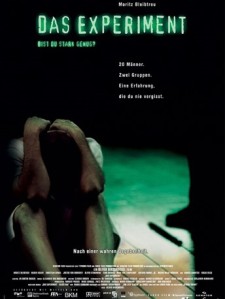 Das Experiment (The Experiment) (2001). A social experiment where people from society provide themselves as test subjects. In this case, they offer their services for a prisoner/warden research case. Based on an actual experiment, the Stanford prison experiment, the test subjects are split into prisoners and wardens and the effects of power, subservience and the reaction thereto are monitored. What you have is a very interesting movie.
Tarek (Moritz Bleibtreu) decides to sign up and is one of the 20 men accepted into the programme. The participants are split into 12 prisoners and 8 guards. Watching over them, a group of researchers/scientists. Initially, everyone is new and all goes relatively well. Until the roles really start kicking in…as to be expected, some of the guards get power-kicks. This is where it gets interesting…some prisoners accept their treatment purely because they just want to finish off the experiment with no conflict, get paid and go home. Tarek, however, will not put up with this just because it is research. Furthermore, a leader-type or dominant person emerges in both groups. Conflict commences with a vicious circle ensuing – the more of a power kick the wardens get, the more they take advantage of the prisoners, the more the conflict level escalates and things rapidly get out of control with dire consequences.

Not necessarily a pleasurable movie to watch, it is, however, really good as well as interesting. And yes, the details may not always be accurate, but, it is a movie after all.

With lots of violence, nudity and generally disturbing situations, avoid this one if you don’t want to watch these things. As the tagline/s say/s:

(Are you strong enough?)

(20 Men. Two Groups. One Experience that you will never forget)

(Based on a true event)

They never imagined it would go this far.

So, maybe I’ve stretched the definition of Prison Movies for Rob’s Genre Grendeur series a bit, but, I’m sure you’ll forgive me.