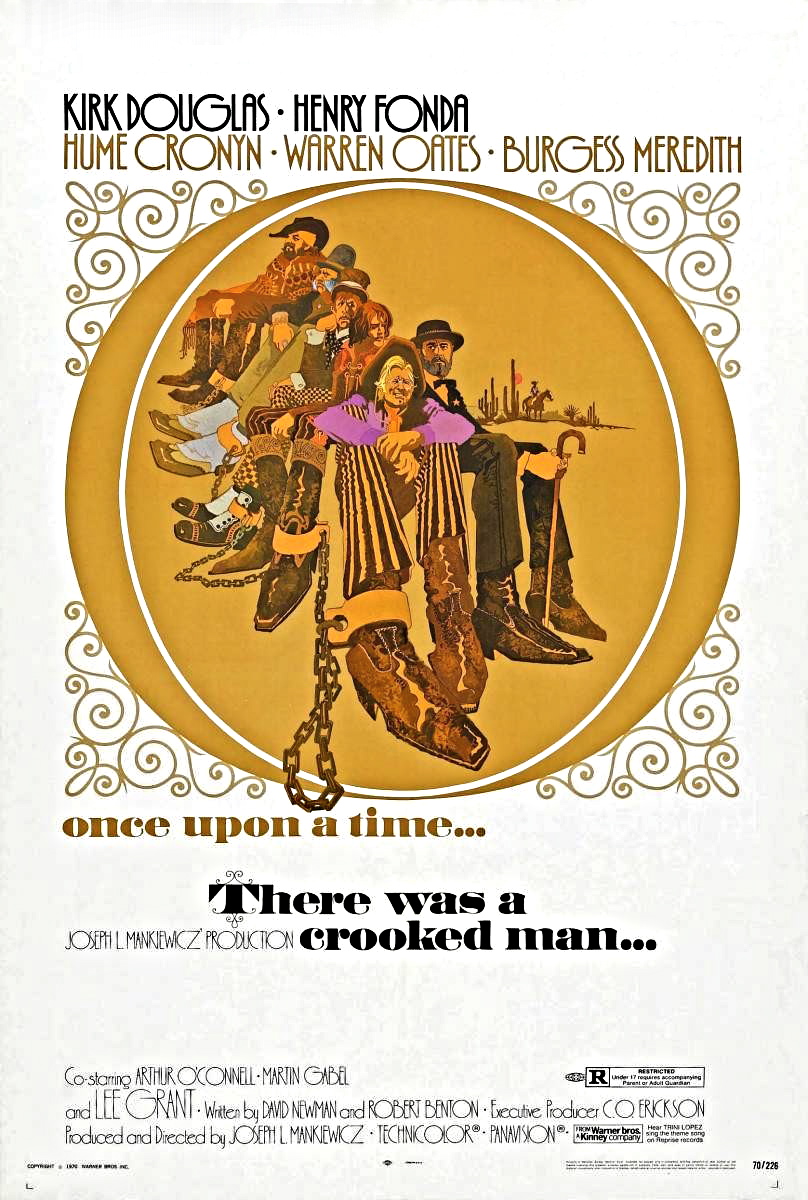 For this month’s next review for Genre Grandeur – Prison Films, here’s a review of There Was A Crooked Man (1970) by Michael Eddy (@michaeleddy6)

I saw this film only once, but it left a lasting impression on me. I hope that time hasn’t colored my thinking, but I remember thinking it was an offbeat Western with some terrific acting, a great twist and a wonderful cast.

Made in 1970, when you had Best Picture nominees Patton, Airport, Five Easy Pieces, MASH and Love Story – it was a late entry into the Western canon – eclectic – like the array of BP nominees. Written by David Newman & Robert Benton (who had done “Bonnie & Clyde” only 3 years earlier) and directed by the legendary Joesph L. Mankiewicz (“All Abvout Eve”, “Cleopatra”, “Guys & Dolls” and “A Letter To Three Wives” amongst others) – you’re talking about a prime above the line pedigree – and I haven’t even gotten to the cast yet. Led by Kirk Douglas and Henry Fonda and dotted with terrific character actors like Burgess Meredith, Warren Oates, Alan Hale, Jr., Hume Cronyn, John Randolph, Lee Grant and Arthur O’Connell – it’s worth a look if only for the caliber of thespians given free rein here to let it rip.

Douglas plays Paris Pitman Jr., a career thief, doing a 10 year hitch in an Arizona prison. Set in the middle of nowhere in the hot desert – it also happens to be in reasonable proximity to a huge cash haul – half a million dollars to be specific – that Douglas has secreted away in a hiding spot in the sand. It’s his personal retirement fund and even if he’s a hale fellow well met kinda guy with his fellow prisoners – who he cajoles and sweet talks and plots with to escape and split the loot – on the inside, he’s hard as flint and not really prone toward sharing any of his ill gotten gains.

Fonda is a local sheriff, who gets himself shot trying to arrest Warren Oates’ Floyd Moon, gives up the sheriff gig when the town no longer wants him and volunteers as a new warden at the prison – where Pitman is already cock of the walk and Moon gets himself incarcerated as well. Fonda – an upright, forthright, straight-shooter – fancies himself a reformer – and does away with the hard labor and tough punishments regularly doled out by the ruthless, semi-sadistic man he replaces – thereby endearing himself as a soft touch of sorts – as much as possible given his position – to the inmates. Pitman included – who’s out to use anyone he can to suit his purposes – his main one being – devising an escape plan – and enlisting all the other inmates he can in the scheme – with a promise to split the buried loot after their prison break. And Douglas is surrounded by actor’s actors – who know how to get into the skin of their characters and know how to deliver a line or a bit of business. Burgess Meredith – like he’d do in Rocky six years later – nearly steals the movie out from all the other heavy hitters.

Tonally, it shifts on a dime between some slap-sticky hijinks and brutal sudden violence – what probably didn’t play so well in 1970 – but may seem more matter of fact and easier to digest in 2017. It unfolds at a languorous pace but don’t blink, because it makes some interesting twists and turns on what looks like a straight ahead journey to treasure buried in the heat shimmers of the Arizona desert. All I can say – is it’s been stuck in my mind since I saw it – and just writing this review makes me want to have that long lost second look.