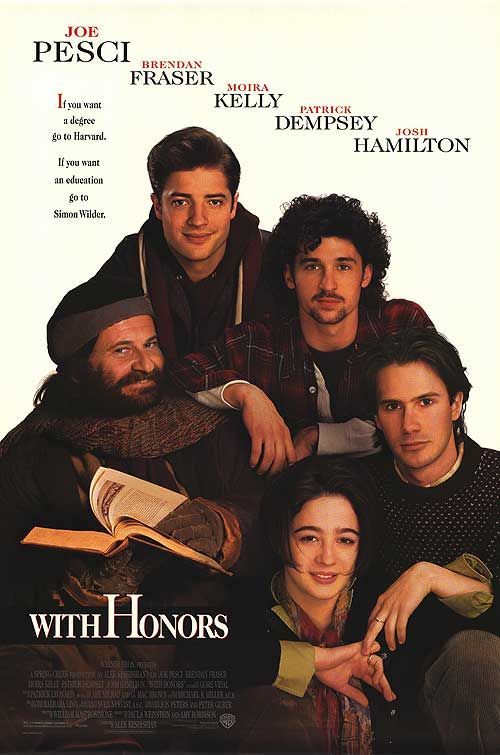 This month’s Genre has been chosen by Ryan of Ten Stars or Less.  We will be reviewing our favorite Boston Film(s). 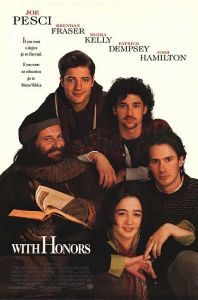 “Yes, they are, they’re perfect. Don’t matter if they’re skinny, fat, blond or blue. If a woman is willing to give you her love, Harvard, it’s the greatest gift in the world. Makes you taller, makes you smarter, makes your teeth shine. Boy, oh, boy, women are perfect. ” – Simon Wilder

Brief Synopsis – A Harvard senior meets an educated bum living in the University Library’s basement and must do his wishes in order to get back his sole draft of his graduation thesis.

My Take on it – This is a film that I’ve actually only seen twice, yet I feel as if I’ve seen it so many more times than that because I was such a big fan of the music video by Madonna for her theme song for this film “I’ll Remember” which is filled with great clips of the film.

Unfortunately, not much else works so well here.

The cast of Joe Pesci, Brenden Fraser, Moira Kelly, Patrick Dempsey and Josh Hamilton seems great on paper, but all of their characters are a bit too stereotypical here and none really give us anything new that hasn’t been done before.

Pesci’s character actually starts off great because he is entertaining, but unfortunately becomes too annoying all too quickly that you just want to strangle him in order to stop his yapping.

This film seems to have a great message about having regrets in life, yet the films seems to contradict itself over and over as things move along. and it gets to the point where the characters themselves aren’t 100% clear as to what they believe is true.

Basically, the best part of this film is the theme song by Madonna.

Check out the video here:

Bottom Line – Nice cast slightly helps this average film that is filled with stereotypical characters.  Pesci is entertaining at first, so gets very creepy and annoying too quickly.  The message about regrets in life is pretty clear, yet it contradicts itself over and over making the characters themselves doubt what is truth.  The theme song by Madonna is the best thing about this film.

MovieRob’s Favorite Trivia – Six big name British actors were in the running for Prof. Pitkannan. But Joe Pesci vetoed all of them wanting the role to go to a big name USA performer.  (From IMDB)

Genre Grandeur Worthy? – Not at all, the story is an interesting idea, but the main characters just aren’t personable enough to care about.