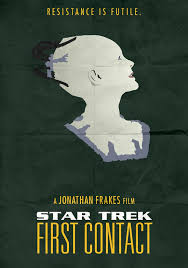 “Reports of my assimilation have been greatly exaggerated. ” – Captain Jean-Luc Picard

Brief Synopsis – The crew of the Enterprise must travel back in time to stop the Borg from assimilating Earth before they achieve Warp capabilities in 2063.

My Take on it – This is my favorite of the original 10 Star Trek films because it works so well as both a film of the franchise and as a stand alone sci-fi action film.

This film basically raises the stakes of the story and does it in a way that makes it more thrilling than any of its predecessors or even the two subsequent films in the franchise.

Loved how they were able to have enough storylines going at once that integrally found a way to keep all of the main characters occupied with important tasks; none of them feel missed at all and we get the full ensemble feel that the TV show sometimes missed a bit by focusing too much on singular characters instead of the team as a whole.

Unlike the previous movie’s plot, this one no longer feels like an extended TV show and is able to take control of the cinematic aspects which works on various levels.

They do a great job exploring the themes of revenge and conquering fears which helps accentuate the dangers involved in the work they preporm on a daily basis.

The story and plot are both extremely entertaining tow atch unfold and it moves along at a great pace.

The musical score by Jerry Goldsmith is my favorite of the entire series because it s able to evoke lots of emotion.

Bottom Line – My favorite of the Trek films because it raises the stakes higher than any of its predecessors or the two afterwards.  Great to see the entire cast return for this film and how most of the characters get nice extended parts here instead of focusing too much on one or two individuals.  This no longer feels like another episode of the show and they manage to make the leap to their own film work on numerous levels.  Loved the themes explored that deal with revenge and conquering your own fears. Great story helps things move along exceptionally well as does the amazingly emotional score by Goldsmith. Highly Recommended!

MovieRob’s Favorite Trivia –  Cochrane asks La Forge, “Don’t you people in the 24th Century ever pee?” This is a reference to the fact that toilets are never shown in the series.  (From IMDB)