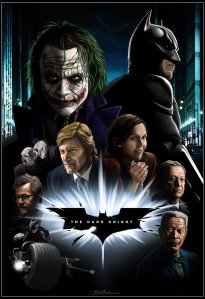 “You either die a hero or you live long enough to see yourself become the villain.” – Harvey Dent

Brief Synopsis – A new villain shows up in Gotham trying to turn everything into one big chaotic mess; three men try to stand up to keep order in the city.

My Take on it – This is one of my all time favorite films mainly due to the amazing experience I had when I saw it in the theater for the very first time on Opening Day.

The experience had me feeling so moved by the intense way the film was made.

I truly believe that this is the best Superhero film ever made and it will be quite hard for someone else to ever top it.

Christopher Nolan showed with this film how much of a genius he is and was able to put to use so many film making techniques that would make this work so well.

I loved the cinematography, the story, the dialogue and the music which works so well here in telling this importantly intense story about good and evil.

The cast is superb and each of them is but a small part of the overall puzzle of the story allowing us to be constantly surprised over and over as things are revealed to us slowly yet explosively.

The standout here of course is Heath Ledger as The Joker who was unbelievable here in a role that won him a posthumous Best Supporting Actor Oscar along with 31 other awards for this intensely riveting role.

I love the psychological ideas explored here about good and evil and truly believe that they get so much right about the way the world works here and how it needs to be changed.

I know it’s too late to continue beating the dead horse, but I still think after 9 years that this movie’s snub from being among the 5 Best Picture nominees was a travesty and the solution of adding more films to the potential nominees the following year has weakened the Best Picture nominee status instead of strengthening it.

If, for some reason, you have never seen this film, you should go watch it right now!!!

Bottom Line – Such an amazing film and is still the very best Superhero film made to date.  The music pacing and so many other aspects of the film making process are done perfectly by Nolan once again proving how great a film maker he truly is.  The cast is superb and they all play perfect pieces of the overall puzzle of the story.  Obviously, Ledger stands out in his amazing turn as the Joker which earned him a posthumous Oscar for Best Supporting Actor.  Was definitely snubbed by the Academy and didn’t get it’s deserved Best Picture Nomination which is a complete farce.  Highly Highly Recommended!

MovieRob’s Favorite Trivia –  Despite endless speculation on which actor had been chosen to portray The Joker, Heath Ledger had always been among Christopher Nolan’s foremost choices for the role. Ledger and Nolan had met during the Batman Begins (2005) casting process for the role of Bruce Wayne/Batman, but Nolan and Heath agreed Ledger was wrong for the part. When casting the part of the Joker, Nolan met with several other actors before Ledger, but found them reluctant to take the role because of the popularity of Jack Nicholson’s performance in the original Batman (1989). Upon meeting with Ledger again, Nolan recognized him as the perfect choice for the part. When asked the reason for this unexpected casting, Nolan simply replied, “Because he’s fearless.” (From IMDB)