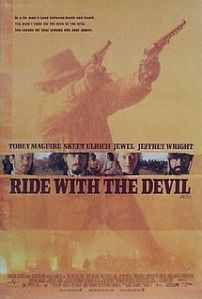 “Don’t think you are a good man. The thought will spoil you.” – Black John

Brief Synopsis – During the Civil War, a group of young men in Missouri join with an unorganized band of fighters loyal to the South

My Take on it – This is a film that I heard of years ago, yet never got around to seeing it because I hadn’t heard many good things about it.

Catherine is an avid fan of Westerns and wanted me to check this one out so I did.

Unfortunately, I can’t say I liked it at all.

The film is too long and move at a meandering pace that doesn’t help keep things interesting.

The cast is ok here yet no one really stands out for the better.

I’ve always liked Tobey Maguire but here he feels extremely miscast as the lead character and instead of feeling like a leading man, his character is too awkward and corny which detracts from making the audience care for him and his situation.

The one good thing about this film are the battle scenes which are choreographed quite well.

It’s easy to feel and see the chaos of war and it’s understandable how situations like some of the ones depicted could cause psychological scarring for the characters.

Unfortunately tho, the story itself is weak and lacks the ability to carry the characters and their predicaments for the length of the film itself.

Bottom Line – Long and drawn out story that just isn’t as tense and interesting as it could have been.  The cast is ok, but Maguire is totally miscast as the lead and seems too awkward and corny in this role. The battle scenes are well choreographed and you can feel the chaos of war, but the story just isn’t strong enough to carry these characters and situations along.

MovieRob’s Favorite Trivia – According to Jewel Kilcher, director Ang Lee cast her as Sue mainly because of her crooked teeth, which he thought looked like the teeth a poor woman living in the 1860s would have (From IMDB)