This month’s Genre has been chosen by Vern of the Video Vortex. We will be reviewing our favorite Graphic Novels that have been adapted for the screen.

The one caveat is that it has to be based on a book that has been published.

Please get me your submissions by the 25th of May by sending them to Vernsworld@movierob.net

Try to think out of the box! Great choice Vern!

Let’s see if I felt that this movie would be worthy of being in the company of my others favorite movies in the genre of Graphic Novels that have been adapted for the screen.… 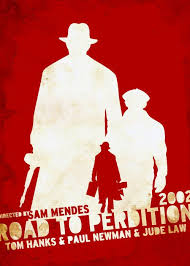 Brief Synopsis – After a hit-man’s son see’s him do his job, he must find a way to make things right between them and also with the local mob boss and his son.

My Take on it – This is a film that I saw once years ago and because it didn’t leave a lasting impression on me, I never really made the effort to see it again.

I’ve been meaning to give it another try and the fact that Vern chose this genre for May, I decided that it was the perfect time to rewatch this and see if my memories of it fail me.

Unfortunately, my memories were solid and this film isn’t very memorable.

The cast is superb and it’s hard to imagine a film featuring Tom Hanks, Paul Newman, Jude Law and Daniel Craig wouldn’t be so great, but this film is proof that it is conceivable.

The story itself moves along too slowly for its own good and it drags far too often as it’s trying to move along.

They had a great opportunity to delve into a story about multiple father-son relationships but instead turn this into too much of an average gangster movie where everyone is just trying to kill one another the whole time.

The problem is that it starts off leading us in another direction and in the end gives us something that is quite unbalanced.

The character study is too superficial and instead of delving deeply into the characters lives, we get something that just skims the surface.

The potential wa sthere, but they really missed the mark here IMHO.

Bottom Line – Excellent cast, yet the story drags on too much and instead of dealing with a potentially great father-son film, we end up with an unbalanced gangster film.  Too much of the film feels like a regular gangster film and they don’t spend enough time letting us understand and get acquainted with the characters involved. A pretty average gangster movie that had the potential for greatness yet missed its mark.

MovieRob’s Favorite Trivia – According to author Max Allan Collins, the “Road to Perdition” graphic novel was an American homage to the Manga series “Lone Wolf and Cub” by Kazuo Koike. Collins quotes Koike at the beginning of the book: “You must choose a road for yourself”. (From IMDB)

Genre Grandeur Worthy? – Not even close. The film drags too much and doesn’t develop the characters well enough.