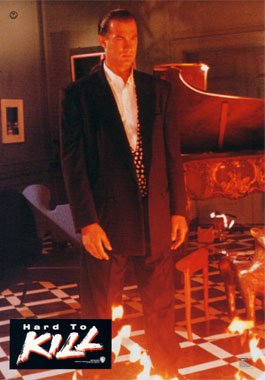 “How do you like this, Vernon? I’d like to kill you so bad I can barely contain myself. But I’ve been thinking. Death is far too merciful a fate for you. So what I’m going to do is… put you in prison. A nice petite white boy like you in a federal penitentiary… Let me just put it this way, I don’t think you’ll be able to remain anal-retentive for very long.” – Mason Storm

Brief Synopsis – After videotaping a politician in deals with the mob, a rogue cop must stay alive in order to expose the crooked politician while also evading corrupt cops trying to stop him.

My Take on it – Over the past thirty years, Steven Segal has pretty much become a joke in Hollywood but when he started out, he was seen as a legitimate on screen heir to Chuck Norris due to his fighting skills.

This was his second film and imho it is one of his best because of the plot which is so sinple yet broad enough to let us watch him decimate lots and lots of bad guys.

We get to see him fight through most of this film and he constantly gets to show us how much he loves bending people’s limbs in directions that would hurt so much if it was all real.

It really humored me that Segal was able to place a key event of the film on Oscar Night and have just about every character mention that fact along the way.

This was probably wishful thinking for the martial arts expert who wanted so badly to be taken seriously as a real actor.

Bottom Line – Definitely a guilty pleasure film and it is by far one of Segal’s better endeavors. The plot is a simple one yet is able to guarantee that Segal can show off his fighting skills as he takes on so many bad guys. Loved how Segal was able to emphasis his love of the movie industry by setting a key scene on Oscar Night AND have just about every character mention that fact. Recommended.

MovieRob’s Favorite Trivia – Kelly Le Brock had pretty much retired from acting at the time and only did the movie as a favor for her husband. In retrospect she calls the movie “Hard to Watch” or “Hard to Believe”. (From IMDB)