This is my second of 3 posts for The Medicine in the Movies Blogathon being hosted by Charlene of Charlene’s (Mostly) Classic Movie Reviews. 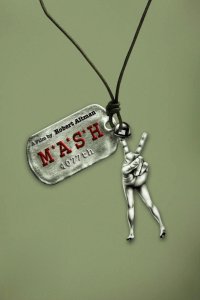 “This isn’t a hospital! It’s an insane asylum, and it’s your fault! ” – Hotlips

Brief Synopsis – During the Korean War, a group of Army surgeons serving near the front use laughs and love to keep their minds off the horror around them.

My Take on it – This is a film that I could watch over and over and never get tired of because it is made so well.

The characters and situations that they all get themselves into are so perfectly staged that they are both funny and poignant at the same time.

Director Robert Altman was able to film this in such a way that amidst the chaos of war, the lives of the characters need to find some kind of sanity so they all help create a carnival atmosphere when they need to pass the time while not saving lives.

This helps make them all feel so much more realistic and it’s easily to understand how and why they act the way they do.

I am always amazed at the way that this film was made to show a social point at a time when the US was at war in Vietnam and they chose to make an anti-war film about a similar yet very different war that took place almost two decades earlier.

This is such an amazing film and the fact that it was able to spawn an 11 season plus TV series shows how rich and innovative one can be when trying to tell stories about these great characters.

Bottom Line – Such a fun movie to rewatch because the characters and situations are spot on.  Altman really knew how to create a carnival atmosphere and kept his characters seem so real despite everything going on around them.  Amazing cast led by Sutherland, Skerritt, Gould, Kellerman and Duvall.  The fact that they were able to tell a film about social issues related to a completely different war is truly an amazing accomplishment to achieve. A great (anti-) war film all around and it’s no surprise that it spawned a TV series that lasted 11 seasons plus. Highly Recommended!

MovieRob’s Favorite Trivia – The 14-year-old son of Robert Altman, Mike Altman, wrote the lyrics to the theme song “Suicide is Painless”. Because of its inclusion in the subsequent TV series, he continued to get residuals throughout its run and syndication. His father was paid $75,000 for directing but his son eventually made about $2,000,000 in song royalties. (From IMDB)