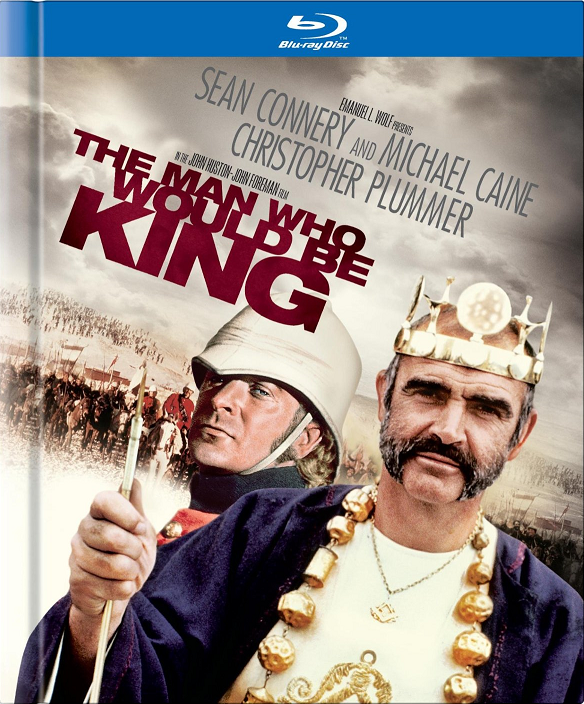 This is part of the Christopher Plummer Movie Blogathon being held over at Seanmunger.com

Tnx for letting me participate Sean!

“Now listen to me you benighted muckers. We’re going to teach you soldiering. The world’s noblest profession. When we’re done with you, you’ll be able to slaughter your enemies like civilized men.” – Daniel

Brief Synopsis – Two former British soldiers head off on a journey to a long lost part of India to try and make them,selves kings of this uncharted land.

My Take on it – This is a film that I’ve wanted to see for quite a while and the fact that it fits in with Sean’s blogathon gave me the perfect opportunity to finally do so.

I have always enjoyed films with Sean Connery and Michael Caine and they both are great here as the two main characters who are trying to find a way to attain riches , and power however they can.

In addition, Christopher Plummer does a great job here as the narrator and author Rudyard Kipling who tells us this tale that he was told firsthand.

One of the problems that I had with this film tho was it’s length; too often during the mid point of the film, parts seemed to drag a bit and I think that it would have been an even better movie had it been trimmed a bit.

This film does a great job discussing the different ways that modern and primitive people look at things in life and how easily one can be affected by delusions of grandeur or even hubris into believing that they can attain anything they want at any cost.

Bottom Line – Very interesting story that shows how hubris and delusions of grandeur can make people do things in order to attain power. The cast is great with Connery and Caine perfectly chosen as the two lead roles and Plummer is also great as the narrator and author Kipling.  The movie feels a bit too long and might have been even better had it been cut a bit because the middle sections drag on a bit too much. Liked the way that this film discusses the modern and primitive ways of looking at things in life and how that can easily affect people decisions. Recommended!

MovieRob’s Favorite Trivia – John Huston tried to launch the film version of “The Man Who Would Be King” many times before completing it. It was originally conceived as a vehicle for Clark Gable and Humphrey Bogart in the fifties, and later as a vehicle for Burt Lancaster and Kirk Douglas, then Richard Burton and Peter O’Toole. When it was considered as a vehicle for Robert Redford and Paul Newman, Newman suggested Sir Sean Connery and Michael Caine. (From IMDB)