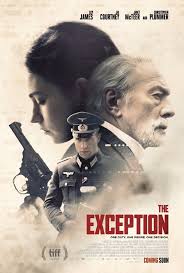 This is part of the Christopher Plummer Movie Blogathon being held over at Seanmunger.com

Tnx for letting me participate Sean!

“I’m ashamed to say that before and after my first marriage I, myself, fathered at least two illegitimate children: one with an Austrian countess, another with a French prostitute who was known in court circles as Madame L’Amour. Both of them, incidentally, blackmailed me for huge sums of money, the Countess and the prostitute. I expected better of the prostitute.” – Kaiser Wilhelm II

Brief Synopsis – In the early days of World War II, a wounded German officer is sent to protect the former Kaiser of Germany in his exiled home in Belgium.

My Take on it – I have always enjoyed historical fiction dramas and ones that revolve around the events in Europe during World War II have always fascinated me.

This film is probably not that close to what really happened at the estate of former Kaiser Wilhelm II in Belgium, but it still is quite an entertaining story nevertheless mainly because it shows us good people in bad situations that strive to come out of it all as clean as possible.

The cast is superb and they do a wonderful job keeping things feeling real yet extremely tense because you never really know what will happen.

Christopher Plummer stands out among them all as the former Kaiser and as always, he yet again gives an amazing performance to add to his already long list of them on his resume.

The story itself is extremely thrilling and I really enjoyed the way that they kept revealing to us little secrets that each of the characters kept hidden which made us constantly wonder whether we, as the audience can trust any of them as things move along at a fast pace.

They also do a great job of subtly giving us important information about characters in passing and sometime just out of focus to give us a better impression of what kind of people we are dealing with.

Bottom Line – Very good historical drama that although it probably is far from the truth, gives us a different side of events.  Great cast helps keep things feeling real yet still tense because of everything going on. Plummer stands out tho as the former Kaiser Wilhelm II and once again gives a great performance to add to his resume. The story is quite thrilling and I loved the way that most of the characters were constantly keeping secrets about who they were that even the audience isn’t always sure who we can trust. Recommended!

3 thoughts on “The Christopher Plummer Movie Blogathon – The Exception (2016)”