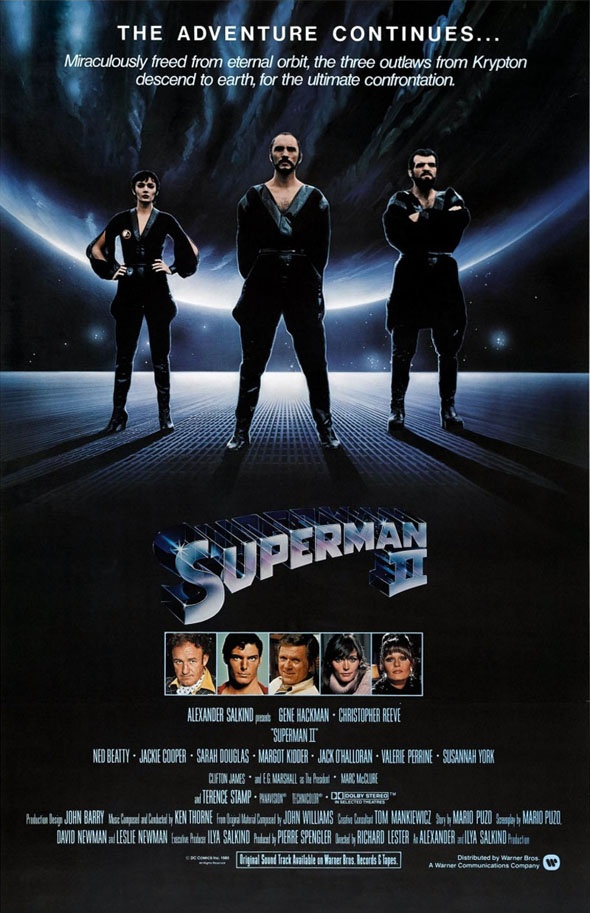 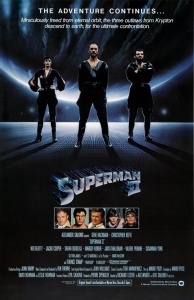 “What am I gonna do with you people, huh? I mean, I held up my end, I delivered the blue boy. What do I get from my triple threat? “Bow! Yield! Kneel!” That kind of stuff closes out a town.” – Lex Luthor

Brief Synopsis – Following the events of the first film, one of the missiles thrown out into space by Superman explodes and releases three super villains from their imprisonment.

My Take on it – This film was one of the first movies that I recall ever seeing in the theater (I was 6 when it came out in ’80) and I have always loved it in the numerous times I’ve seen it since.

In 2006, a new version of the film was issued by the original director of the film, Richard Donner who was fired and subsequently replaced by new director Richard Lester.

Both versions are amazing to watch, but they ultimately are two completely different films.

The Lester version is very campy and stays far away from having a serious and ominous tone and the Donner version is more of a darker, more mature look at a superhero story.

I like what Donner does here much better if I were to have to decide between the two versions.

Gene Hackman’s character of Lex Luthor is even better in this sequel and we get to know more about the character’s real intentions in this film where he plays a very important part in how events take place.

I have always loved the way that this film places the ever-honest and trustworthy Superman in a position where he must decide between his own selfish needs and the needs of the whole world.

This concept can be pondered on for hours while at the same time teaches us a lesson about the true place of heroes in the world.

On the one hand, it’s too bad that Donner was fired and that we didn’t get his vision in the original film.

On the other hand tho, the fact that that happened helped to give us two very different versions of such an amazing film.

Besides, the special effects used by Donner in 2006 are much more advanced than what he would have had access to in the late 70’s, so it is visually much better than it would have been.

Bottom Line – Great version of such a great superhero movie.  Both versions of the film by Lester and Donner are so much fun to watch, but the serious tone in Donner’s vision is superior in most ways. Hackman is even better in this film than in the first because we get to know his character even better here.  Putting Superman in a position where he must make the choice between himself and humanity is a great concept to ponder and teaches us a lesson about the place of heroes in the world.  It’s too bad Donner was taken off the project midway through yet the way that his version was eventually made would probably be so much different than what he would have done back then especially due to technological advancement ever since. Highly Recommended!

MovieRob’s Favorite Trivia –  This film is the only Superman movie where the line “Up, Up and Away” is said by one of the characters. (From IMDB)