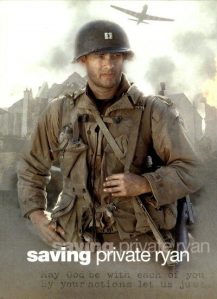 “You see, when… when you end up killing one of your men, you see, you tell yourself it happened so you could save the lives of two or three or ten others. Maybe a hundred others. Do you know how many men I’ve lost under my command? Ninety-four. But that means I’ve saved the lives of ten times that many, doesn’t it? Maybe even 20, right? Twenty times as many? And that’s how simple it is. That’s how you… that’s how you rationalize making the choice between the mission and the man.” – Capt. Miller

Brief Synopsis – Following the D-Day invasion, a squad of soldiers are sent on a mission to rescue a soldier who is being sent home after his three brothers are killed in action.

My Take on it – This film is one of my all time favorite films and despite its near 3 hour runtime, I never get bored or tired with the amazing story that Steven Spielberg chose to tell us.

This film is probably also the most realistic war film ever made because it allows the viewer the experience of seeing such a realistic and gruesome battle from the perspective that we are there right beside the characters as they battle their way across German occupied France.

I love the way that the camera shakes and also has blood, sand and water occasionally thrown onto the lens in order to help give us the illusion of witnessing it all first hand.

Tom Hanks, one of the best lead actors of the 90’s is perfect here as the commander of the squad and once again manages to give an Oscar nominated caliber performance.

Spielberg chose to cast unknown actors in the various other roles in order to keep us focused on the story and not high profile actors in the roles.

Ironically, almost all of them became quite recognizable after this film came out which makes that point sonewhat moot upon rewatches.

Nowadays it would be hard to not recognize Vin Diesel, Adam Goldberg, Giovanni Ribisi, Jeremy Davies, Matt Damon, Barry Pepper or Tom Sizemore but back then it was an extremely different story.

Each of the characters are developed so well that we care so much about what will happen to them.

Each of them has their own unique voice within the discourse of the themes presented here and none feel like typical ‘stock’ soldier characters.

The overall theme of this film resonates so loudly about the futility of war but as soldiers one must follow orders even when you don’t fully understand them in an attempt to be able to earn the right to eventually return home.

As with most war themed movies, this is very anti-war but uses the brutality of war to show us how futile it can truly be.

Even after 19 years, I’m still mad at the Academy for not choosing this as Best Picture over Shakespeare in Love (1998) because this clearly is the better film and also much more memorable.

At least they were smart enough to give Spielberg an Oscar for Best Director.

Can’t wait to see this again….

Bottom Line – One of the best war films and among the best overall films ever made. Spielberg does an amazing job capturing the feeling of real close combat and we are treated to an experience unlike any other as we are taken as close as we can get to a real battle. The cast is superb with Hanks, Burns, Pepper, Davies, Goldberg, Diesel, Sizemore, and Ribisi all wonderful as the men chosen for such a mission. Each of them is made real and unique by their mannerisms and opinions which help the diverse dialogue about the overall thematic debate to constantly take place. The cinematography is amazing and it helps enhance the patriotic and grandeur feeling of it all.  It’s completely unacceptable that this film lost Best Picture at the Oscars to Shakespeare in Love (1998) because there is no rational reason for that to have happened. At least they had the forethought to award Spielberg the award for Best Director.  Highly Highly recommended!

MovieRob’s Favorite Trivia –  The Omaha Beach scene cost eleven million dollars to shoot, and involved up to 1,000 extras, some of whom were members of the Irish Army Reserve. Of those extras, twenty to thirty of them were amputees, issued with prosthetic limbs, to simulate soldiers having their limbs blown off. (From IMDB)