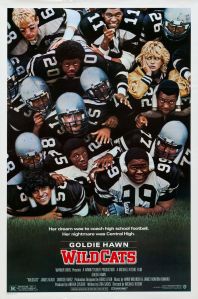 Brief Synopsis – A female sports coach gets the opportunity to coach an inner city football team and the question remains who will quit first, her or or rowdy players.

My Take on it – I loved watching this film as a kid because they do such a wonderful job giving us a sports film with a female coach.

This idea is quite a rarity among movies and it was refreshing to finally see it especially since it is done quite well here.

Goldie Hawn is great as the coach and is able to pull it all off so well.

Loved the antics of the players and the fact that some of them have risen to prominence in the 30+ years since this came out makes it even more fun to watch them.

They also don’t shy aware from gender issues here but rather tackle them head on which I give them lots of credit for deciding to not skip those aspects of this kind of story.

The music video at the end of the film is so 80’s because it does a great parody of what the Chicago Bears did when they won the Superbowl.

Check out both videos here:

Bottom Line – Such a fun film to watch. Hawn is superb in the title role and pulls it off so well. The antics of the players are quite interesting to watch especially since a number of the players have become quite well known in the 30+ years since this was made.  Great to see a sports film from a female coaching perspective and they don’t shy away from the gender issues here but take them head on which gives this film even more credit for what it does. Recommended!