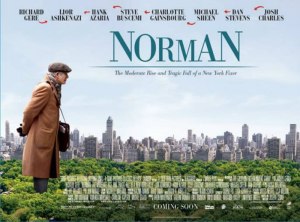 “There are two kinds of moguls: First kind is like a big ocean liner ship. Makes a lot of waves, a lot of noise, everybody sees it coming from miles away. Like Jo Wilf. I think your boss, Minister Maor, is actually… in his close circle of friends. of course. And then there is Arthur. Well, Arthur is more like a nuclear submarine. he’s quiet, he’s fast, he’s young. Extremely sophisticated. ” – Norman

Brief Synopsis – A man tries to make political and social connections on a small scale which will hopefully lead to bigger ones in the future.

My Take on it – This is a film that I have been looking forward to seeing for quite some time since I’m such a big fan of Joseph Cedar’s work.

His film Footnote (2011) is a near masterpiece in my eyes and I could connect to it on so many levels.

This film takes a whole different approach to its characters and the fact that I know that part of the idea is based on something that happened to Cedar’s own relative gives this film even more weight because it comes across as being quite genuine.

The main idea of forming connections no matter how insignificant they may be works really well here because we truly never know where these connections can lead in the future.

The way things can expectantly turn for better or worse in life is never in our hands and this film tries to show how depending on what happens in the world things can move you up or down on the ladder of life.

The message about friendship, loyalty and honor comes through quite clearly

The cast is great and Richard Gere is a great choice for the lead.

The rest of the cast is filled with actors from various international backgrounds and they all work so well together and the script helps to easily blend them all together.

This helps give the film an even more realistic feel because the story itself is quite international.

Bottom Line – Great idea because it shows how close we all can be to greatness but need to do what little we can for those around us because you never really know what the future holds.  The fact that Director-writer Cedar is familiar with a real life similar scenario that included a family member helps give this film even more weight because he knows what he is talking about. The cast is great and they do a great job mixing together American, Israeli and other international actors to give the  story even more of a genuine feel to it. Recommended!

One thought on “Norman: The Moderate Rise and Tragic Fall of a New York Fixer (2016)”